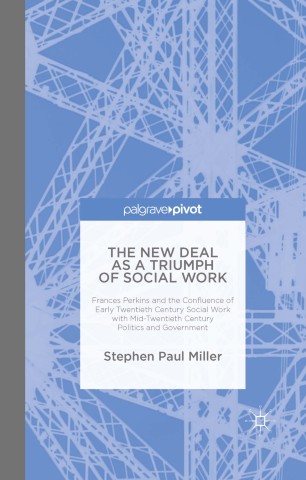 The New Deal as a Triumph of Social Work concerns the 'hand' the New Deal plays from the perspective of early American History in which government and business cooperation is assumed and economic rights are addressed collectively whereas political rights are considered individually. The New Deal reconfigures this 'ratio' of rights by folding 'social work' into the aims of government. Miller describes the vital part Frances Perkins and her personal history play in this development.

Stephen Paul Miller is Professor of English at St. John's University, USA. He is author of several books including The Seventies Now: Culture as Surveillance (1999) and several poetry books including There's Only One God and You're Not It (2011) and Being with a Bullet (2007). He is co-editor of Radical Poetics and Secular Jewish Culture (2009), and The Scene of My Selves: New Work on New York School Poets (2001). Miller was a Senior Fulbright Scholar at Jagiellonian University in Krakow, Poland.

"Stephen Paul Miller has written a brilliant and multifaceted cultural history meditation on the origins of the ideal of economic equality in America. Ranging as freely among the philosophies of America's founding fathers as among the policy initiatives of the New Dealers, Miller gives primacy in modern times to the role of Franklin D. Roosevelt's Secretary of Labor Frances Perkins, the nation's first female cabinet member. Perkins, using her interpersonal skills as a former social worker, pioneered the use of collaborative meetings to solve social and policy conflicts. In Miller's interpretation, her skills and insights furthered not just New Deal corporatism, but above all that era's unprecedented federal commitments to protecting individual rather than group economic rights. This is an important book for our times." - Jeffrey Kinkley, Professor of History, St. John's University, USA

"Miller's work insightfully ties concepts of economic and political rights at the time of the American founding to those espoused during the New Deal era of the 1930s. He provides original and detailed analysis of the transition of Frances Perkins from social reformer to political activist. His book should be of interest to readers in history, political theory, cultural studies, and sociology." - Robert Speel, Associate Professor of Political Science, Penn State Erie, The Behrend College, USA

"Stephen Paul Miller has written a groundbreaking analysis of economic equality throughout American history. This book significantly advances upon previous treatments of New Deal economic rights by showing how the New Deal wed human and economic rights, showing how FDR and Perkins consider economic rights as more than the right to mere economic subsistence but rather as the right to full economic and human development. At a moment where the 99 percent is still being held to account for itself, Miller's brilliant book reminds us of how FDR and Perkins addressed an issue that is still very much unresolved." - David Yaffe, Syracuse University, USA
Buy options