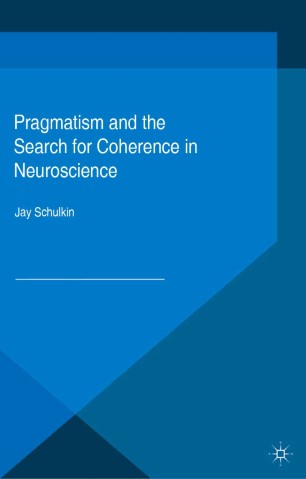 Pragmatism and the Search for Coherence in Neuroscience

We have known for over a thousand years that the brain underlies behavioral expression, but effective scientific study of the brain is only very recent. Two things converge in this book: a great respect for neuroscience and its many variations, and a sense of investigation and inquiry demythologized. Think of it as foraging for coherence.

Jay Schulkin is Research Professor in the Department of Neuroscience at Georgetown University, USA, where his work on brain systems that underlie behavioral adaptation is informed by both neuroscience and philosophical perspectives.

Pragmatism is a philosophic theory about the thought-directed actions that engage us with other people and things. The theory has several versions. Some resemble phenomenological studies of meanings, values, and 'the way the world looks to me.' Jay Schulkin's version is the realist theory of C.S. Peirce. It affirms that reality has a decided character, one discovered as we engage it for purposes of our own. Schulkin supposes that knowledge is representational and adaptive: our aims and interests are blunted if we don't adapt to situations and opportunities at hand. Pragmatists of this sort emphasize the personal quest for coherence throughout a range of interests: in perception, thought, meaning, action, intention, and with partners. Why this emphasis? Because incoherence may be evidence of misperception, misconception, miscalculation, or social conflict. Initiatives are more likely to be successful if there is coherence in these dimensions.

Pragmatism has been committed to empirical inquiry, and to the social character of inquiry since Peirce emphasized community in his description of scientists who challenge one another while working together. Pragmatists construed Darwin's theory of evolution as evidence that responsibility for intelligent adaptation is mind's principal role: we don't survive to reproduce without it. There was, however, one large void in the pragmatists' armor. They, like Aristotle, emphasized thought but knew little or nothing of its material basis. Where Aristotle wrote of 'capacities,' the pragmatists emphasized 'habit.' This seemed a weak reed, a place marker for entities that were inferred but otherwise unknown. Sparrows might evolve, but there was philosophic consensus that mind's structure and activity were best understood in the static terms of Descartes or Kant. Jay Schulkin's book describes the recent history of the neurologists and physiologists who transformed this conception of mind. We 'rummage for coherence,' he writes. Error and frustration are commonplace, but we revise our plans as often as required until they succeed. How is success recognized? By its perceived effects, including the control we exercise over other things and one another. For error is instructive; we alter an attack until other things are engaged on our terms.

Philosophy has turned. Once content to describe mind's construction of experience and its powers for self-reflection, it acknowledges that mind is a function of body, hence embedded in the natural world. Jay Schulkin is a reliable guide. His Pragmatism and the search for coherence in neuroscience is richly informed, convincing, and an easy read. Readers who know little of pragmatism or neurology will learn much of both.

'Professor Schulkin has spent his career foraging in a dizzying array of intellectual environments while making his own important contributions in each of them. The fruits of his efforts are on impressive display as he invites the reader to join him on a richly detailed and thoughtful journey.'