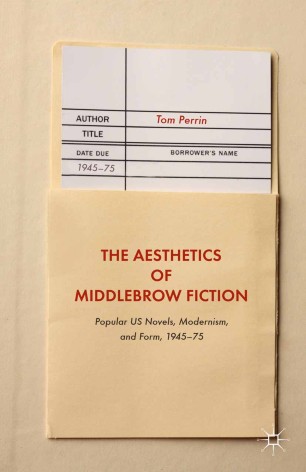 The Aesthetics of Middlebrow Fiction

During the Cold War, many popular American novels were labelled "middlebrow," leading to a general belief that these texts held less intellectual merit. Perrin debunks these unfair assumptions through works by James Michener, Harper Lee, and Leon Uris, arguing that such writers made a major contribution to the tradition of American literature.

Tom Perrin is Assistant Professor of Language and Literature at Huntingdon College, USA.

“Tom Perrin’s study of middlebrow fiction from the post-war and Cold War United States offers a new set of identifications with which to categorize novels and authors as middlebrow within a specifically U.S. context. … The Aesthetics of Middlebrow Fiction is a solid and expert work, and opens up many intriguing new directions for middlebrow studies, in the U.S.A. and elsewhere.” (Kate MacDonald, The Review of English Studies, 2015)

"The way Perrin locates the middlebrow novel - not as marginal, but firmly within the history and tradition of the American novel - is significant. For him, our literary tradition doesn't go from Sentimentalism to Realism to Modernism to Postmodernism in such neat order. Realism continued. It continues. The Aesthetics of Middlebrow Fiction offers convincing evidence of its aesthetic complexity and artistic significance." - Cecilia Konchar Farr, Associate Professor of English and Women's Studies, St. Catherine University, USA, author of Reading Oprah and The Ulysses Delusion

"Beautifully written and carefully observed, The Aesthetics of Middlebrow Fiction is an important new contribution to debates about the significance of that large list of mid-century novels that were once both widely read and considered worthy of critical attention yet now tend to be considered less as works of art and more as sociological curiosities. Tom Perrin departs from earlier scholarship on the middlebrow by closely reading novels as diverse as To Kill a Mockingbird, The Price of Salt, and Exodus. In so doing, he demonstrates convincingly that middlebrow authors relied on a coherent set of aesthetic strategies in their efforts to make literature responsive to the pressing questions of twentieth century social life. Thus this book provides not only a major new account of the middlebrow but also of its vexed relation to literary modernism." - Jan Radway, Walter Dill Scott Professor of Communication Studies, Northwestern University, USA

"The Aesthetics of Middlebrow Fiction only sounds oxymoronic until you read it. Tom Perrin persuades even the most skeptical reader that middlebrow fiction had an aesthetic philosophy, projected itself as a rival to modernism, and shaped early postmodern fiction as well. Perrin's book requires readers of 20th-century fiction to take the middlebrow seriously as an intervention in the tradition of the novel and the history of aesthetics." - Deborah Nelson, Associate Professor of English, University of Chicago, USA