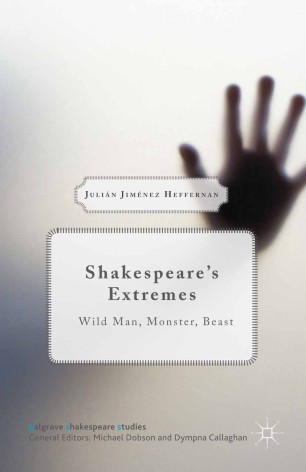 Julián Jiménez Heffernan is Professor of English and Comparative Literature at the University of Córdoba, Spain. His research interests include literary theory, modern fiction, and Renaissance culture. He is the co-editor of Community in Twentieth-Century Fiction and has published articles in journals like Comparative Literature, NOVEL: A Forum on Fiction, Textual Practice and Contemporary Literature.

"This is a passionately written, original, and thought-provoking study of mythic and embodied extremes in Shakespearean drama. Julius Caesar, Edgar, Caliban, Timon, Hamlet, Coriolanus, and Lucrece are Marlovian heroes who cross the Rubicon of social norms and positive law, becoming both more than man (gods or god-like) and less than man (beasts). Establishing the classical and early modern outposts of the exception, especially in the writings of Lucan, Montaigne, Hobbes, and Erasmus, this compelling and original study models a humanist anti-humanism and a counter-classical classicism that takes shape in the exchanges linking antiquity's darker philosophers to the brutal, taciturn misfits of Shakespeare's tragedies. This book is characterized by a broad, fresh look at Shakespeare and his sources, an exultant sense of philosophical reach, and a refreshingly European orientation towards its material." Julia Reinhard Lupton, author of Thinking with Shakespeare: Essays on Politics and Life