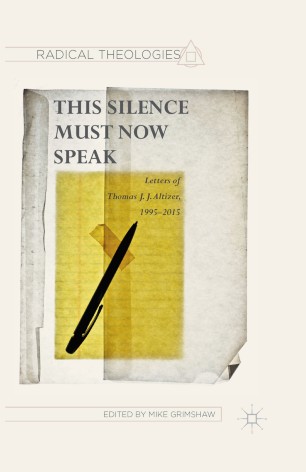 This Silence Must Now Speak

Thomas J. J. Altizer is the leading radical theologian whose creative lifework—a steady output of some seventeen books and tens of articles—spans from the late 1950s to the present. In the last few decades, Altizer has embraced the communicative possibilities of the internet to write circular letters on religious, theological, political, and philosophical matters. The recipients are an international virtual community of scholars and friends who work in a number of disciplines, ranging from cultural studies scholar Mark C. Taylor, to British literary theorist David Jasper, to well-known contemporary philosophers such as Richard Kearney, John D. Caputo, and Edward S. Casey. Like the seventeenth century philosopher Marin Mersenne, who was renowned in the age of Descartes for gathering around him a network of brilliant philosophers and scientists through exchanges of written correspondence, so Altizer in his own domain of philosophical theology has acted as a hub for networking talented thinkers and scholars. In these brilliant letters, which take the form of meditative mini-essays, Altizer writes in a more accessible, personal, and occasionally confessional manner. These letters, an intellectual tour de force, provide another entry into engagement with Altizer's thought.

Thomas J. J. Altizer was the central figure in the 'death of god' debate of the late 1960s, and has continued to develop his distinctive imaginative theology for over fifty years, above all in response to the advent of modern nihilism. In his prolific writings he consistently argues for a Christian atheism that challenges institutional orthodox Christianity at its core. His most recent works are Living the Death of God: A Theological Memoir, The Call to Radical Theology, and The Apocalyptic Trinity.

Mike Grimshaw is Associate Professor of Sociology at the University of Canterbury, New Zealand.

'This collection testifies to the sustained brilliance and continuing relevance of Altizer's theological voice. As a recipient of some of these letters, I can attest to how he has encouraged and instructed many younger theologians with these electronic missives, in addition to his numerous books. Michael Grimshaw performs a great service with his careful editing and insightful introduction.' - Clayton Crockett, Professor and Director of Religious Studies Program, University of Central Arkansas, USA