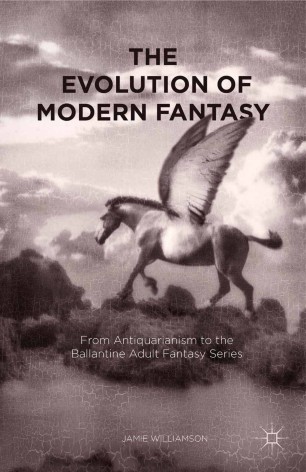 The Evolution of Modern Fantasy

From Antiquarianism to the Ballantine Adult Fantasy Series

In this comprehensive study, Williamson traces the literary history of the fantasy genre from the eighteenth century to its coalescence following the success of Tolkien's work in the 1960s. While some studies have engaged with related material, there has been no extended study specifically exploring the roots of this now beloved genre.

Jamie Williamson is Senior Lecturer at the University of Vermont, USA.

“It’s a masterful study that deservedly won the 2016 Mythopoeic Scholarship Award in Myth and Fantasy Studies. … The Evolution of Modern Fantasy may be defined as a history of that territory up to the time that the dotted line was drawn. … Williamson has offered more than enough both of thoughtful consideration of the history of fantasy and of identification of books beyond Carter to read.” (David Bratman, Mythlore, Vol. 35 (1), 2016)