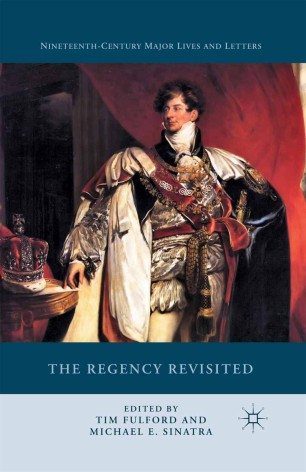 The Regency Revisited reconfigures Romantic Studies through a neglected timeframe. It demonstrates how politics and culture of the Regency years transformed literature. By co-opting authors, the Regency provoked opposition, and brought new genres and modes of writing to the fore. Key figures are Robert Southey and Leigh Hunt: The Regency Revisited shows their pivotal roles in transforming Romanticism. Austen and Byron also feature as authors who honed their satire in response to Regency culture. Other topics include Blake and popular art, Regency science (Humphry Davy), Moore and parlour songs, Cockney writing and Pierce Egan, and Anna Barbauld and the collecting and exhibiting that was so popular an aspect of Regency London.

Michael E. Sinatra is Associate Professor of English at the Universite? de Montre?al, Canada. He is the author of Leigh Hunt and the London Literary Scene, 1805–1828, one of the general editors of the Selected Writing of Leigh Hunt, and the founding editor of Romanticism and Victorianism on the Net.

“The scholars involved in this volume are some of the best respected Romanticists of their generation and most have been developing their theories of periodization for the last several decades through conferences and in print. … the powerful readings offered by this volume can and should inspire Romanticists to revisit the Regency, to test and contest, develop and help remake the narrative of Romanticism. As such, this volume is a welcome and valuable gift to future scholarship on the period.” (J. Andrew Hubbell, Review 19, nbol-19.org, February, 2017)