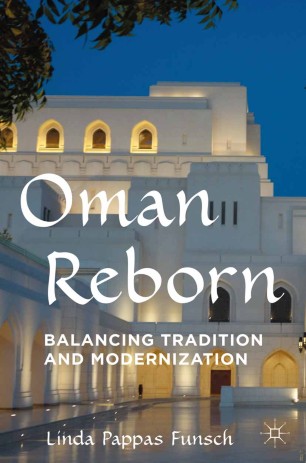 The Sultanate of Oman is one of the few "good news" stories to have emerged from the Middle East in recent memory. This book traces the narrative of a little-known and relatively stable Arab country whose history of independence, legacy of interaction with diverse cultures, and enlightened modern leadership have transformed it in less than fifty years from an isolated medieval-style potentate to a stable, dynamic, and largely optimistic country.
At the heart of this fascinating story is Oman’s sultan, Qaboos bin Sa’id, friend to both East and West, whose unique leadership style has resulted in both domestic and foreign policy achievements during more than four decades in office.
Exploring Oman from a historical perspective, Funsch examines how the country’s unique blend of tradition and modernization has enabled it to succeed while others in the region have failed. Accounts of the author’s own experiences with Oman’s transformation add rich layers of depth, texture, and personality to the narrative.

Linda Pappas Funsch is a specialist in modern Middle East studies and Islamic history. She has studied, worked, and traveled extensively throughout the region. A freelance writer, consultant, and educator for more than forty years, she lectures frequently about Oman at scholarly symposia and institutions such as the World Bank, the World Affairs Council, Georgetown University, and the National Council on US-Arab Relations.

“‘Oman Reborn: Balancing Tradition and Modernization’ by Linda Pappas Funsch is a well-documented book on the sultanate that traces the Gulf country’s history of independence, its legacy of interaction with diverse cultures and enlightened modern leadership. … The book illustrates how Sultan Qaboos used his discrete foreign policy to defuse tensions between Washington and Tehran after the Iranian government arrested three Americans in different situations.” (Hussein Shehadeh, thearabweekly.com, May, 2018)

“Freelance specialist Funsch, who focuses on the Middle East and, particularly, the Sultanate of Oman, presents a well-organized and detailed analysis of Omani history, culture, and contemporary aspects. … Keeping in mind the author's very positive and sympathetic perspective, readers will glean much significant information and valuable insight into ‘one of a few good news stories to emerge from the Middle East.’ Summing Up: Recommended. General and undergraduate collections.” (B. Harris Jr., Choice, Vol. 53 (10), June, 2016)

“Linda Pappas Funsch, in Oman Reborn: Balancing Tradition and Modernization, focuses more on Oman’s very recent history. Her historical overview is intended primarily as context for the country’s trajectory in recent years, especially since the accession of Sultan Qaboos bin Said in 1970. … provide excellent overviews and have been meticulously researched, with ample documentation and footnotes, as well as extensive indexes. … stylistically appealing and present unapologetically positive accounts of the country and its current ruler.” (Richard Schmierer, Middle East Policy, Vol. 23 (1), Spring, 2016)

“Pappas-Funsch delightfully provides the reader with an overarching introduction to the country’s rich cultural heritage which then sets the grounds for an eloquent explaination of Qaboos’s foreign policy … . By writing this very important book, Pappas-Funsch has indeed succeeded in reaching a larger audience about the uniqueness of Oman within the Arab world and how it truly stands out as one of the few ‘good news’ stories to emerge from the Middle East in the contemporary era … .” (Sigurd Neubauer, TheNewArab, alaraby.co.uk, March, 2016)