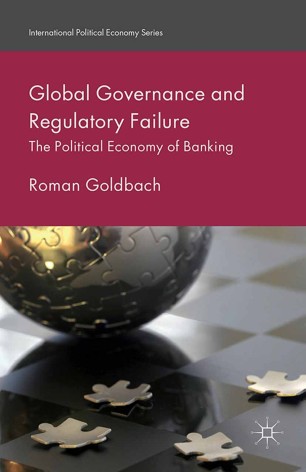 The Political Economy of Banking

The author provides a theoretical framework of the global political economy of banking regulation and analyses the policies and politics of the Basel Committee on Banking Supervision. He demonstrates how global governance has contributed to the onset of the Great Recession and continues to increase the likelihood of future global financial crises.

Roman Goldbach works for the Deutsche Bundesbank, Department of Banking and Financial Supervision. His research focuses on the policy implications of the globalization and financialization of political economies.

"Global Governance and Regulatory Failure stands out from the plethora of books on financial regulation and the global financial crisis not only for the author's thorough examination of the new transnational regulatory regime, but also for his innovative and critical analytical approach. The paradox of increasingly institutionalized transnational regulation is that it does not close "governance gaps" but creates new loopholes, leads to the watering down of proposed regulations, and increases the possibilities of multilayered regulatory conflict and arbitrage between key sets of actors transnational regulators, especially the Basel Committee on Banking Supervision, national regulatory agencies, politicians and bureaucrats seeking to promote national competitiveness, and diverse, often competing, special interests in the financial sector. In other words, regulatory reform can itself be dysfunctional, increase moral hazard, and reduce regulators and governments to mopping up after crises rather than prevent-ing them i.e., regulatory failure. This book is a timely warning to both analysts and policymakers that the public good of financial stability may be farther away, not closer." - Philip G. Cerny, University of Manchester, UK, and Rutgers University, USA

"Roman Goldbach provides a rich and nuanced analysis of the interaction of transnational and national authorities over the past two decades that have combined to globalize - in a partial way - financial governance. Drawing on the most recent scholarship on financial governance, Goldbach outlines how the global layering of governance mechanisms generates incomplete, unreconciled and competing authority domains that sustain what he calls a durable global disorder. The financial crisis has revealed the depth of this disorder, and Goldbach insists that in order to confront this disorder we need to establish a sustainable form of accountability between transnational and national authorities. He has made a fine contribution to debates on post-crisis financial regulation." - Randall Germain, Carleton University, Canada

"In this superbly written and empirically rich book, Roman Goldbach provides the most convincing analysis that I have yet to come across of the failure to achieve effective international coordination in order tackle financial instability. This is International Political Economy at its most innovative, theoretically and methodologically, and will be of interest to international relations scholars and students interested in international coordination more generally. Goldbach points to the 'unchecked simultaneity of national and transnational influence' in international standard setting on banking to explain coordination failure and develops a novel and effective way to measure the influence of the main policy actors involved." - David Howarth, University of Luxembourg, Luxembourg

"Roman Goldbach's book is a theoretically sophisticated, empirically rich analysis of what has gone wrong and why in global banking regulation before and after the global financial crisis. By adopting an 'eclectic' approach based on 'transgovernmental regulatory regime', the author argues that the key problem in securing financial stability is the 'unchecked simultaneity of national and transnational influence' in global banking regulation. Methodologically, the book deploys an innovative way to measure the influence of the main policy actors in international standard setting by building 'integration and rejection rates' concerning the main issues at stake. This book is a major contribution to the international political economy literature of finance and will be of great interest to scholars and policy-makers alike. It should also be of interest to the wider public because it points out the likely policy failure in the quest for financial stability, unless the current governance framework is fundamentally revised." - Lucia Quaglia, University of York, UK