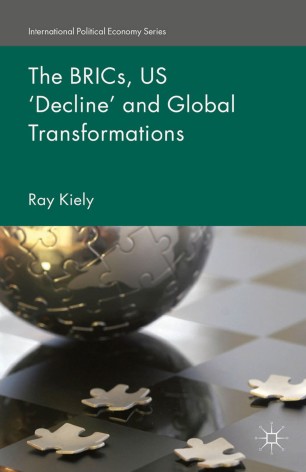 The BRICs, US ‘Decline’ and Global Transformations

The author examines the rise of the BRICs and the supposed decline of the United States. Focusing on the boom years from 1992 to 2007, and the crisis years after 2008, he argues that there are limits to the rise of the former and that the extent of US decline has been greatly exaggerated.

Ray Kiely is Professor of Politics at Queen Mary University of London, UK. He is the author of seven previous books including Rethinking Imperialism (2010), The Clash of Globalisations (2005) and Industrialization and Development (1998).

"It has become widely accepted that the rise of the South in recent decades, and especially since the western financial crisis, has transformed world politics and world economics. In this major new book Ray Kiely carefully assesses the evidence, questioning how transformative this rise really is, and whether it entails the decline of the United States. He offers a sober, searching critique of the performance of the BRICs, setting out what they have achieved, but also the limits to their continued progress. He points to the continuing persistence of international power relationships and inequality, arguing that these make it too soon to announce the end of the West. Kiely injects a welcome dose of realism into current debates, and no-one involved in them can afford to ignore the book's arguments." - Andrew Gamble, University of Cambridge, UK

"Ray Kiely has produced the most thoughtful, balanced and perceptive book yet on the limitations of the rapid capitalist development that has taken in the BRICS and some other countries of the global south in recent decades. A must read." - Leo Panitch, York University, Canada

'No issue is more relevant today in the field of development than the 'Rise of the South'. In this book Ray Kiely offers the best critical survey available of this topic from all relevant angles: the presumed decline of the US, the ambiguous emergence of China, the supposed convergence between North and South, the implications of the global crisis, and the key features of the emerging world order. This book is essential reading for students and scholars wishing to engage intelligently with the ongoing transformation of the global economy." - Alfredo Saad-Filho, SOAS, University of London, UK