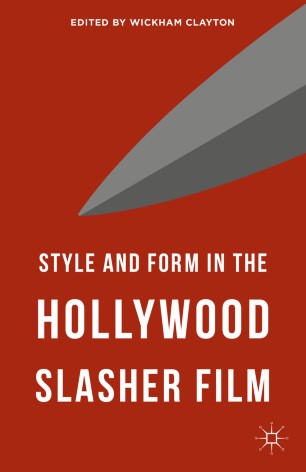 Style and Form in the Hollywood Slasher Film

Style and Form in the Hollywood Slasher Film fills a broad scholastic gap by analysing the elements of narrative and stylistic construction of films in the slasher subgenre of horror that have been produced and/or distributed in the Hollywood studio system from its initial boom in the late 1970s to the present.

'This collection deserves attention from anyone interested in the interrogation and enjoyment of the Hollywood Slasher film. Offering staunch, articulate, and passionate arguments for adopting formalist methodologies in the study and appreciation of the Hollywood Slasher genre, these essays make valuable contributions to existing horror film scholarship, extending the discussion beyond socio-ideological and theoretical perspectives.' Valerie Wee, National University of Singapore

'Style and Form in the Hollywood Slasher Film is a welcome addition to critical works on the genre. Wickham Clayton brings together a very focused set of essays exploring the aesthetics and formal structures of the slasher film. The contributors explore a wide range of slasher films, both the typical examples and the unexpected, pushing at the boundaries of the form. This collection will provide interest and raise challenging questions for readers of all levels, shedding new light on formalist approaches to the genre.' Brigid Cherry, Research Fellow in Screen Media, St Mary's University, Twickenham

'With exciting essays on the slasher subgenre from classic to revisionist films, this timely collection offers a rich vein of enquiry and superb range of scholarship on slasher stylistics. Style and Form in the Hollywood Slasher Film opens up the field of slasher studies for a new generation, challenging dominant theories and offering advanced and innovative perspectives.' Sorcha Ní Fhlainn, Lecturer in Film Studies and American Literature, Manchester Metropolitan University