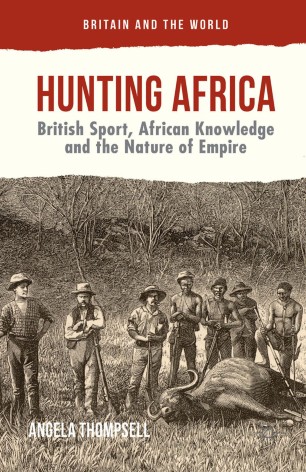 British Sport, African Knowledge and the Nature of Empire

This book recovers the multiplicity of meanings embedded in colonial hunting and the power it symbolized by examining both the incorporation and representation of British women hunters in the sport and how African people leveraged British hunters' dependence on their labor and knowledge to direct the impact and experience of hunting.

Angela Thompsell is Assistant Professor of British and African History at The College at Brockport, State University of New York, USA.

“Hunting Africa is a valuable tool for scholars who study late Victorian and Edwardian Britain. … Hunting Africa adds to the field of scholarship on imperial masculinity and femininity. Moreover, Thompsell’s thorough investigation of personal accounts, social contracts, and violence deepens our understanding of the fraught and complex relationship between colonizers and colonized.” (Precious Mckenzie, American Historical Review, February, 2017)

“Angela Thompsell’s Hunting Africa is relatively short at just over 150 pages of text … . The book touches on themes of gender, the social history of both African and colonial communities, the economics of hunting, and the image of Africa in British culture. … Hunting Africa was published by Palgrave Macmillan in conjunction with the British Scholar Society, which indicates that the audience is specialist historians of empire and gender … .” (Toby Harper, H-Disability, H-Net Reviews, h-net.org, May, 2016)