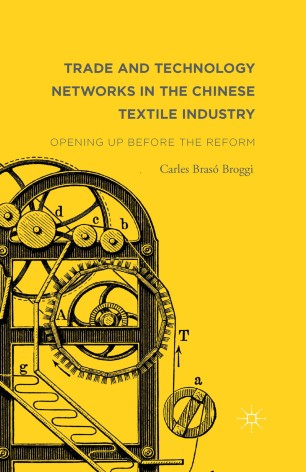 Trade and Technology Networks in the Chinese Textile Industry

Opening Up Before the Reform

The aim of this book is to track the historical origins of China’s economic reforms. From the 1920s and 1930s strong ties were built between Chinese textile industrialists and foreign machinery importers in Shanghai and the Yangzi Delta. Despite the fragmentation of China, the contribution of these networks to the modernization of the country was important and longstanding. Facing the challenge of growing in a fragmented country, Chinese textile firms such as Dafeng, Dacheng and Lixin focused on urban markets and also on importing technology for upgrading their production. When the war against Japan blocked trade routes inside China, these networks were concentrated in Shanghai where they envisaged an export-oriented development strategy for China that was based on importing machinery and exporting manufactured products. However, this strategy was only implemented precariously in Shanghai, while the city stood as a neutral space in the first years of the Japanese occupation, but was only consolidated in Hong Kong in the late 1940s, where textile industrialist and most of the foreign importers migrated. These networks were thus reestablished in Hong Kong, where they contributed to the city's industrialization in the Cold War period. Meanwhile, the Chinese industrialists that stayed in Shanghai and the Yangzi Delta had to adapt to the Maoist regime and were progressively incorporated into the state-owned companies or the local government agencies such as the United Front or the Textile bureaus. However, from the early 1970s, the links between Hong Kong and Shanghai were reactivated and these networks played, again, a key role in the modernization of China, especially regarding the imports of technology and exports of manufactured goods. The book ends with the first joint-ventures between Hong Kong businessmen and Chinese local administrations that took place in the beginnings of China's economic reforms in 1979.

“Using well-preserved firm documents, the author describes a trade and technology network that was essential to Chinese firms in the early twentieth century. … Scholars interested in business history and Chinese history would find the book inspiring and engaging.” (Cong Liu, The Journal of Economic History, Vol. 77 (2), June, 2017)
Buy options