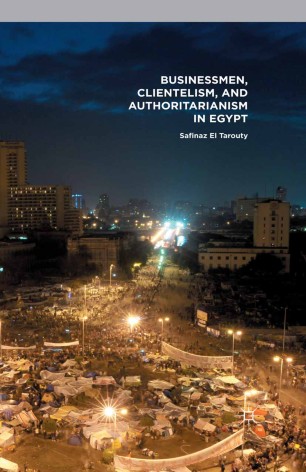 Businessmen, Clientelism, and Authoritarianism in Egypt

After the ousting of former Egyptian President Hosni Mubarak in February 2011, much debate surrounded the reasons for the former regime's longevity and its collapse. Here, Safinaz El Tarouty provides an original contribution to the study of authoritarianism in Egypt by focusing on the role of businessmen in authoritarian survival. As the regime intensified neoliberal economic reforms that led to social deprivation and frustration among increasing numbers of Egyptian citizens, they co-opted businessmen in order to defuse challenges and buttress the regime, constructing a new political economy of authoritarianism. Extending the existing literature on clientelism, El Tarouty creates a typology of regime-businessmen relations to describe the multiple mechanisms of co-option in the context of economic liberalization. Ultimately, though, these businessmen proved too narrow a constituency to provide legitimacy to the regime and, in fact, formed one of the reasons for its collapse.

Safinaz El Tarouty holds a BA and MA from the American University in Cairo, Egypt, and a PhD in Politics from the University of East Anglia, UK.

"This book is essential reading to help understand the important role that business interests played in underpinning Mubarak's 30 year authoritarian rule in Egypt between 1981-2011. Safinaz El Tarouty offers a nuanced account and explanation for the political economy that emerged under the dictatorship and the roles played by a range of powerful economic actors." - Ray Bush, Professor of African Studies and Development Politics, University of Leeds, UK

"This is the most detailed analysis available of state-business relations in Egypt. Under El Tarouty's microscope the complex political and economic links between politicians and businessmen are revealed not just as supporting, but also as modifying and even challenging authoritarian rule. Her well-documented findings thus provide a new, nuanced understanding of crony capitalism in Egypt and elsewhere." - Robert Springborg, Professor of National Security Affairs, Naval Postgraduate School, USA