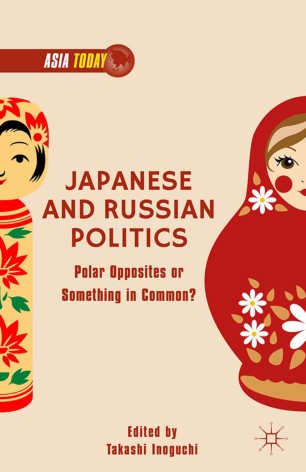 Polar Opposites or Something in Common?

This volume offers a comparative analysis of Japanese and Russian politics in the 2010s, examining both domestic dimensions and foreign policy. A bi-national collaborative effort, the volume is structured to offer perspectives on each country from both Russian and Japanese scholars. An introduction by Takashi Inoguchi gives a historical overview of the two countries' paths to development as 'late comers' vis-à-vis the West in the late nineteenth century. The analysis that follows reveals that Japan and Russia have come to acquire genuinely striking contrasting features: frequent leadership change despite extraordinary societal stability and continuity in Japan and infrequent leadership change despite extraordinary ups and downs in Russia.