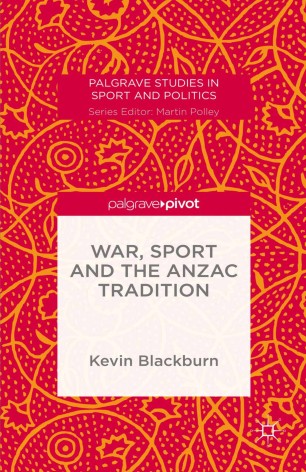 War, Sport and the Anzac Tradition

An Anzac sporting tradition has been manufactured in Australia and become part of national identity. References to war are often found in Australian sport. Commemoration of war is done through sport on the day to remember Australia's war dead – Anzac Day. War, Sport and the Anzac Tradition traces the creation of this sporting tradition at Gallipoli in 1915, and how it has evolved from late Victorian and Edwardian ideas of masculinity extolling prowess on the sports field as fostering prowess on the battlefield. In World War II, again the call for sportsmen to do their duty as young and fit men was strongly felt. The Korean and Vietnam Wars challenged and affirmed notions of an Australian 'soldier sportsman' that had emerged in World War I. The remnants of these early twentieth-century ideas remain in the twenty-first century when sport seems to have appropriated Anzac Day and looms large in the Anzac tradition.

Kevin Blackburn is Associate Professor in History at the National Institute of Education, Nanyang Technological University, Singapore. He is the author of The Sportsmen of Changi (2012), which deals with the relationship between sport and captivity under the Japanese during World War II.

“War, Sport and the Anzac Tradition is an at times exemplary work of synthesis and analysis that deserves to be read by the community of scholars in the discipline of Australian sport history and by general readers beyond.” (Ian Syson, Australian Historical Studies, Vol. 49 (4), 2018)
Buy options