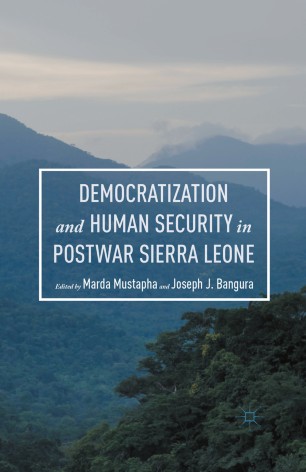 This edited collection is the first book-length project to undertake a multidisciplinary study of democratization and human security in the post war nation of Sierra Leone. The overarching theme is there is synergy of democratization and human security which makes it imperative for the state to foster and enhance the realization of these concepts in postwar Sierra Leone. The book is divided into two broad thematic sections. The first section deals with democratization with a critical examination of the creation and instrumentality of institutions largely considered a necessity for democracy to take hold in a country. The second section delineates human security or the lack thereof in key areas of political, social and economic life. Though the book is specific to Sierra Leone, African countries and indeed countries transitioning to democracy around the world, scholars and practitioners of postwar or democratic transition studies would benefit from the concepts expounded in this collection.

Marda Mustapha is Associate Professor of Comparative Politics at the College of Saint Rose, USA with expertise in International Relations and Comparative Politics. His research interests include African Politics, Conflict Studies, Democracy in Africa, Governance, Global Political Economy and Global Politics broadly defined. Mustapha has published numerous peer reviewed articles on conflict, health and peace. He is also a member of the Institute of Governance Reform a Think Tank in Sierra Leone and with a consulting partner of The Economic Forum, a development and policy consulting firm also in Sierra Leone.

Joseph J. Bangura is Associate Professor of History and Director of the African Studies Program at Kalamazoo College, USA. His research interests include African Intellectual and Urban History, State Security and Governance in Africa. Bangura has published numerous peer reviewed works on various aspects of colonial and contemporary Sierra Leone including, security and peace building, identity formation, gender and commerce and Islam in colonial Freetown.