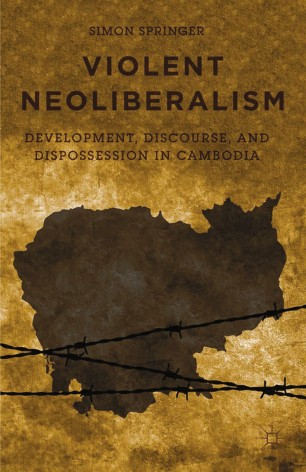 Development, Discourse, and Dispossession in Cambodia

Violent Neoliberalism explores the complex unfolding relationship between neoliberalism and violence. Employing a series of theoretical dialogues on development, discourse and dispossession Cambodia, this study sheds significant empirical light on the vicious implications of free market ideology and practice.

Simon Springer is Associate Professor of Geography at the University of Victoria, Canada. He has been researching the political, social, and geographical exclusions that neoliberalization has engendered in post-transitional Cambodia for over a decade.

“Grounding his book on previously published scholarly articles and chapters, Springer (geography, Univ. of Victoria, BC) presents a full-throated critique of ‘Neoliberalism [which] has become the dominant political economic arrangement in our world today.’ … The volume is well written and contains a useful bibliography. Of interest principally to scholars and graduate students whose interests are in issues of ideology and social development and their interrelationship. Summing Up: Recommended. Graduate students and up.” (A. Magid, Choice, Vol. 53 (10), June, 2016)

"Empirically-grounded, and theoretically-rich, this revolutionary book constitutes the most provocative account of contemporary Cambodia yet written. It is, though, much more, in that Springer provides a radically new way of thinking about the complex intersection of violence and economic development. Violent Neoliberalism will challenge and transform how scholars must think through political economy." - James Tyner, Professor, Department of Geography, Kent State University, Ohio, USA

"If any doubt existed about the inherently violent nature of neoliberalising processes, then Simon Springer removes it with great aplomb. As a result, proclamations of 'success stories' of development in countries such as Cambodia should be taken for what they are: authoritarian, violent tales of dispossession. The book is required reading for all who take an interest in how neoliberalism and ultimately capitalism can be understood and overcome." - Ian Bruff, Lecturer, School of Social Sciences, University of Manchester, Manchester, United Kingdom

"Written from a critical perspective, Professor Springer's provocative book is a major contribution to the academic literature on violence in general. Theoretically well informed, methodologically sophisticated and empirically rich, Violent Neoliberalism is also a powerful challenge to the conventional perspectives that tend to focus overwhelmingly their analytical attention on what Cambodians do and the impact of their cultural traditions on their violent behaviour." - Sorpong Peou, Professor and Chair, Department of Politics and Public Administration, Ryerson University, Toronto, Canada