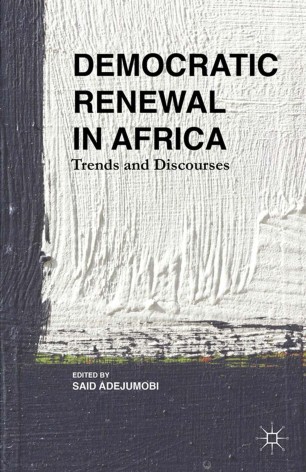 Since the 1980s, democratic struggles have triggered constitutional reforms, elections, and other forms of political progress. This comprehensive volume offers refreshing perspectives on Africa's democratic renewal and will open up dialogue on the trends and trajectory of Africa's democratic future.

"This is a landmark study of the conception, application, and outcome of democratization in Africa since the fall of the Berlin Wall. The eight essays edited and summarized by Said Adejumobi provide a compulsory reading for all students of current African affairs, giving a critical evaluation of the problems democracy faces in Africa during the present conjuncture, and the questions worth raising to understand it better." - P. Anyang' Nyong'o, former Secretary General of the African Association of Political Science (AAPS), former Minister of Economic Planing and also Health Services in Kenya, and former Secretary General of the ODM Party in Kenya