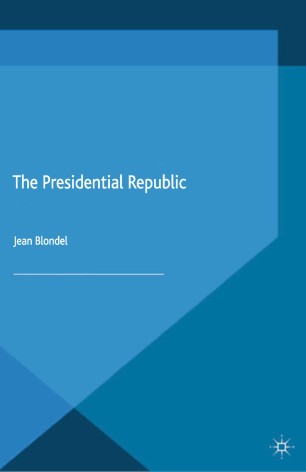 This book is about a variety of national arrangements and practices, whose common characteristics are to constitute 'presidential republics' and which as such have become the main form of government in the contemporary world.

“In this original and well-organized work, Blondel (European University Institute, Italy) provides a historical and comparative study of presidential systems in the world … . The book is important for students of Latin America, Africa, and the former Soviet Union because of the inclusion of key chapters, with effective tables, on the evolution of presidentialism. … a very useful book for both political science and area studies. … Summing Up: Recommended. Upper-division undergraduate, graduate, research, and professional collections.” (A. Siaroff, Choice, Vol. 53 (7), March, 2016)

'Jean Blondel has an aptitude for picking out important topics and demonstrating not only that there is a lot more to say about them, but also that many more basic facts are available within a comparative context. This weighty book takes the debate on Presidential leadership beyond the Anglo-American context to the neglected cases of Latin America (over 200 years), the former Soviet Union and South East Asia. Just to have a focussed discussion of politics in these countries is invaluable. But also to have well-founded generalizations about Presidential leadership will be a great aid to political analyses at a time when this topic is becoming increasingly important.'

'This is an insightful encyclopedic examination of the almost infinite range of variations among "Presidential Republics" in the world. I have no doubts that this book will be a central point of reference in further comparative research on presidential governments.'

'Jean Blondel gives us a vital contribution to our understanding of presidentialism. He rehabilitates the image of this type of political regime by showing that the presidential invention by the Americans was an alternative to the monarchy. Hence the importance of legitimacy given to a man, the president elected by the people directly or indirectly.'