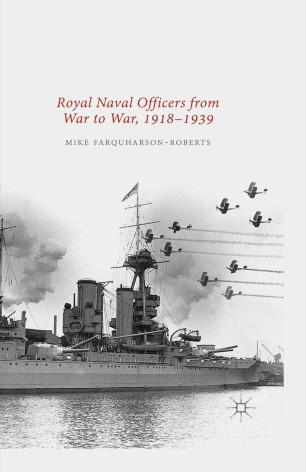 In the context of their war experience in the First World War, the changes and developments of the Executive branch of the Royal Navy between the world wars are examined and how these made them fit for the test of the Second World War are critically assessed.

Mike Farquharson-Roberts CBE OStJ PhD MA MB BS FRCS holds a PhD in Maritime History from University of Exeter. He previously had a long and distinguished career in the Royal Navy.

“This is a rewarding, in-depth examination of the Royal Navy’s officers during the years between the two world wars. … Royal Naval Officers from War to War, 1918 -1939 is an essential source of information about the professional development of the Royal Navy officers who fought the Second World War.” (Jan Drent, The Northern Mariner, Vol. 27 (2), April, 2017)

“Mike Farquharson-Roberts … is an unabashed supporter of the Royal Navy, and his book on the quality of the officer corps within the senior service from 1918 to 1939 reflects that fact very convincingly. … It is a convincing thesis and one that scholars and those with a deep and abiding interest in the Royal Navy should find eminently satisfactory.” (Malcolm H. Murfett, International Journal of Maritime History, Vol. 28 (3), August, 2016)

“This volume springs from his doctoral thesis at Exeter University in 2013 and ‘is born of a wish to discover how a navy that had apparently performed so far below public expectations, largely due to institutional rigidity, in the First World War, performed so well in the Second World War with many of the same officers’. … Highly recommended.” (G. F. Liardet, The Naval Review, February, 2016)