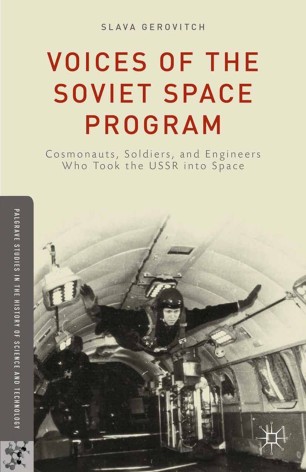 Voices of the Soviet Space Program

Cosmonauts, Soldiers, and Engineers Who Took the USSR into Space

In this remarkable oral history, Slava Gerovitch presents interviews with the men and women who witnessed Soviet space efforts firsthand. Rather than comprising a "master narrative," these fascinating and varied accounts bring to light the often divergent perspectives, experiences, and institutional cultures that defined the Soviet space program.

Slava Gerovitch is Lecturer in History of Mathematics at the Massachusetts Institute of Technology, USA.

“Voices of the Soviet Space Program unites an invaluable collection of individual experiences and personal viewpoints. The impressive successes of the space program did elicit real 'cosmic enthusiasm,' especially among the young but also among the known and unknown participants in the Soviet space program.” (Julia Richers, Kritika: Explorations in Russian and Eurasian History, Vol. 18 (4), 2017)

“Slava Gerovitch  … has published a fascinating primary source in Voices of the Soviet Space Program. This book consists of thirteen interviews with cosmonauts, soldiers, and engineers that Gerovitch … conducted from 2002 to 2010 over several oral history projects. … The interviews enable the reader to learn about the beginnings of the Soviet space program … . This is an important contribution to space history, cold war history, the history of the USSR, and the history of technology.” (Paul Josephson, Technology and Culture, Vol. 57, April, 2016)

“Slava Gerovitch … has assembled here a vibrant collection of thirteen interviews that he conducted with Russian space personalities in the U.S. and Russia between 2002 and 2010. … This is all a rare and welcome achievement in the literature. … In sum, this excellent book reveals new facts and insights on the personal, institutional, technical, and political facets of Soviet rocketry and spaceflight policies and practices between the Second World War and the end of the Cold War.” (Michael G. Smith, Slavic Review, Vol. 75 (2), Summer, 2016)