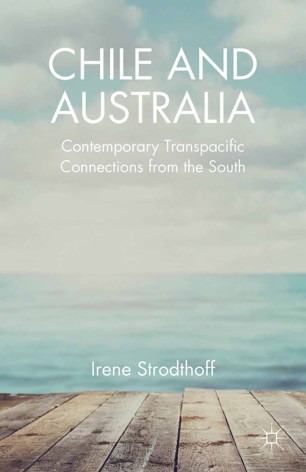 Contemporary Transpacific Connections from the South

Exploring bilateral narratives of identity at a socio-discursive level from 1990 onwards, this book provides a new approach to understanding how Chile and Australia imagine and discursively construct each other in light of the bilateral Free Trade Agreement signed in 2008.

Irene Strodthoff holds a PhD from the University of Sydney, Australia.

'This is a highly innovative and original cross-disciplinary work. It is thorough and insightful, weaving the complex issues involved in transnational connections and discourses of nationalism between two countries in the 'colonized' South. Strodthoff makes an important contribution and intervention in discussions about practices of exclusion and inclusion within and between nations. It is engaging in its development of new understandings of how countries imagine and construct themselves and others discursively.' - Alana Mann, Senior Lecturer, Department of Media and Communications, The University of Sydney, Australia

'This book takes a fresh look at contemporary issues of multi-culturalism and global connections in Latin American contexts by exploring a novel and surprising conjunction: Chile and Australia. Its great strength is its narrative appeal. It tells many stories which provoke surprise and thought. In Irene Strodthoff's narrative, Chile and Australia go from seeming like an odd couple to emerging as a fascinating instance of the multiple new forms of connection produced by globalization.' - Bob Hodge, University of Western Sydney, Australia