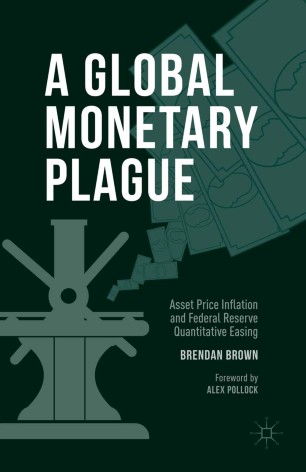 The Great Monetary Experiment designed and administered by the Federal Reserve under the Obama Administration unleashed strong irrational forces in global asset markets.  The result was a “monetary plague”  which has attacked and corrupted the vital signalling function of financial market prices.

This book analyses how quantitative easing caused a sequence of markets to become infected by asset price inflation. It explains how instead of bringing about a quick return to prosperity from the Great Recession, the monetary experiment failed in its basic purpose. Bringing about economic debilitation, major financial speculation, waves of mal-investment in particular areas, and a colossal boom in the private equity industry, the experiment instead produced monetary disorder.

Brendan Brown puts the monetary experiment into a global and historical context, examining in particular Japanese “folklore of deflation” and the Federal Reserve’s first experiment of quantitative easing in the mid-1930s.  The author couples analysis from the Austrian school of monetary economics and Chicago monetarism with insights from behavioral finance, and concludes with major proposals for the present and the future, including ideas for monetary reform in the United States, and suggestions for how investors can survive the current market “plague”.

Brendan Brown is a monetary economist whose areas of expertise include monetarism in theory and practice, Austrian School monetary tradition, European monetary union, Japanese monetary issues and international financial history.  He obtained a PhD at the University of London, an MBA at the University of Chicago and a MSc at London School of Economics.  Dr. Brown is Head of Economic Research at a leading Japanese financial institution.  He is an Adjunct Fellow at the Hudson Institute in Washington DC, and an Associate Scholar of the Mises Institute, US.

Dr. Brown gives the first clear and coherent explanation of the dire effects on the economy of the Federal Reserve's Great Monetary Experiment. He artfully and completely debunks two great myths of our age: that periods of secular price deflation are destabilizing; and that the Japanese 'lost decade' was caused by deflation. Most important, Brown brilliantly integrates elements of behavioral finance with sound monetary theory to explain how the Fed's policy of manipulating interest rates is sowing the seeds of a future financial crisis of global scope by systematically distorting the market mechanism that brings the market interest rate into accord with the neutral rate. If you want to truly understand where the economy is headed and why, this is the only book worth reading.