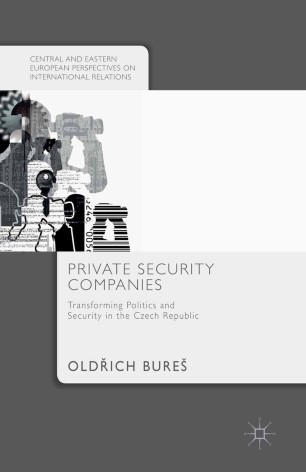 Transforming Politics and Security in the Czech Republic

Old?ich Bureš is the head of the Center for Security Studies at Metropolitan University Prague. His research focuses primarily on the privatization of security and the fight against terrorism. His work has been published in Security Dialogue, Terrorism and Political Violence, International Studies Review, Cooperation and Conflict and several other key journals.

"Old?ich Bure provides a critically-needed view into the privatization of force in a country that has, until now, remained on the outskirts of much of the literature on force privatization. The Czech Republic's unique experiences with private security companies, and Bure 's incredibly robust approach to examining them, together make Private Security Companies a thrilling contribution to the body of literature on force privatization." Dr Molly Dunigan, RAND Corporation, Carnegie Mellon University, USA

"An original and comprehensive analysis of the private security industry in the Czech Republic, its close linkages with Czech policy makers, and its impact on politics and public security. Old?ich Bure 's book is of interest to a wide range of scholars and practitioners from politics, international relations, criminology, sociology and law." Professor Elke Krahmann, Professor of Security Studies at Brunel University, UK

"Bure shows that the privatization processes in Central and Eastern Europe have affected also security and the politics surrounding its provision. His book opens a rare window on the Czech context where security entrepreneurs are core to both security and politics. It inspires questions about similar processes elsewhere.'' Professor Anna Leander, Copenhagen Business School, Denmark