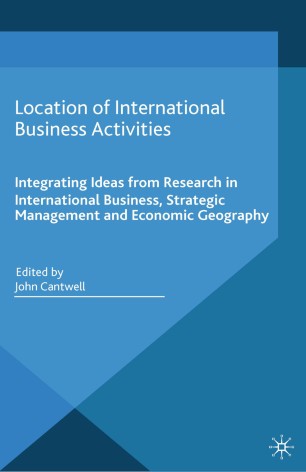 In recent years an extensive range of new research has been revisiting the topic of the location of international business activities, from a variety of different perspectives and background interests. This work has been inspired in part by two apparently quite different but actually related contemporary trends: on the one hand, an emergence or revitalization of clusters of activities co-located in or around selected global city regions or fast growing metropolitan areas; and on the other hand, an increased global dispersion of activities conducted within the value chains managed or coordinated by many large multinational enterprises and their business partners. The former trend has given rise to discussions of how the elite of the cultural-cognitive economy of the 21st century (in Allen Scott's terminology) or the creative class (Richard Florida's term) are now being drawn or brought back to major urban centers; while the latter trend is associated with debates over outsourcing, and the economic and social consequences of shifts in the ownership and location of distinct nodes of value chains once production systems become more fragmented and the component parts of such systems become more geographically dispersed. An increased interest in the subject of international business location has been shown by scholars in Strategic Management, in Economic Geography, and in Regional Science, as well as in our own interdisciplinary field of International Business Studies. However, as is often the case in academic research communities, these bodies of scholarship have tended to develop at something of a distance from one another, each conversing internally more than they have with one another. Location of International Business Activities aims to promote a greater conversation between those interested in the topic of Location from various different backgrounds or starting points. The articles are taken from a special issue on the theme of the Multinational in Geographic Space which was published by The Journal of International Business Studies in 2013.