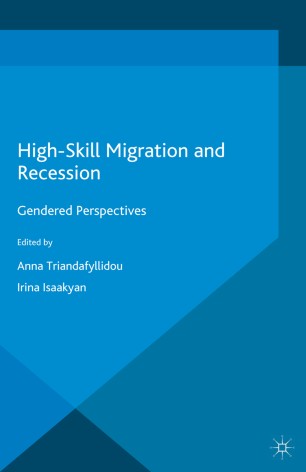 Women migrants are doubly-disadvantaged by their sex and outsider status when moving to a new country. Highly skilled women are no exception to this rule. This book explores the complex relationship between gender and high-skill migration, with a special focus on the impact of the current economic crisis on highly skilled women-migrants in Europe.

" [...] this volume's incisive and wide-ranging analysis suggests that the implications for skilled migrants are far from positive, with widespread deskilling, especially among women. Isaakyan and Triandafyllidou have, for the first time, brought together a brilliant set of case studies from across Europe in a range of sectors to argue that the the gendered outcomes of the crisis for highly skilled migrants has been far from gender-neutral. This is a wonderful contribution to both the literature on the crisis and on skilled migration." - Parvati Raghuram, The Open University, UK

"There is a lot of noise but not much research on high skill migration in Europe. Triandafyllidou and Isaakyan's edited book fills the void, providing first-hand data and adding an original interpretative angle to the general picture. With an admirable variety of sources and methods, the authors outline how the looming Euro-crisis further exacerbates gender-based differences in migration trajectories. As public debate on the effects of intra-EU mobility abounds, this volume is a healthy antidote to the all-too common, over-simplified contrast between low-skill and high-skill migrants." - Ettore Recchi, Sciences Po, France

"Ever wondered who are these 'best and brightest' that countries try to attract with their policies on high skill migration? Ever wondered what the crisis did to these policies? This book shows the gender bias involved, and the indirect but powerful impact of the crisis on high skill female migrants, leaving female migrants mostly underpaid and overqualified. A brilliant contribution to migration, recession and gender scholarship!" - Mieke Verloo, Radboud University Nijmegen, the Netherlands