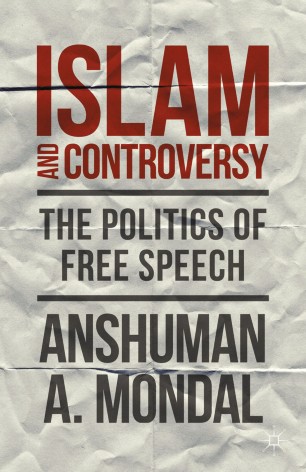 The Politics of Free Speech After Rushdie

Was Salman Rushdie right to have written The Satanic Verses ? Were the protestors right to have done so? What about the Danish cartoons? This book examines the moral questions raised by cultural controversies, and how intercultural dialogue might be generated within multicultural societies.

Anshuman A. Mondal is Reader in English at Brunel University, UK. He is Chair of the Postcolonial Studies Association and member of the Multicultural Textualities collective. The author of Nationalism and Post-Colonial Identity, Amitav Ghosh, and Young British Muslim Voices, he has published widely on contemporary Muslim identities and cultures, nationalism, and multiculturalism.

“He provided the reader with a well-presented publication that was logically structured with each chapter flowing seamlessly from the one into the other. … scholars in literature would find his analyses informative, social scientists will also benefits from Mondal’s instructive insights.” (Journal of Global Analysis, Vol. 6 (2), 2016)

"A highly perceptive analysis of the grounds and moral - but not necessarily legal - limits of free speech. It both retains and goes beyond the important insights of liberalism. Its theoretical discussion enriches and is in turn enriched by a shrewd analysis of concrete cases. A most welcome and timely book." Lord Bhikhu Parekh, author of 'The Parekh Report: The Future of Multi-Ethnic Britain' and 'Rethinking Multiculturalism'

"In contrast to much journalism and commentary on these issues, this is an important, reasoned and patient account of these inflammatory matters. Mondal's book is crucial reading for those interested not only in the work and impact of Salman Rushdie, not only for those working in contemporary literature more widely, but also those with a concern for issues of freedom, expression and the future of cosmopolitan and multicultural democracy." Professor Robert Eaglestone, Professor of Contemporary Literature and Thought, Royal Holloway, University of London

"Anshuman Mondal has performed the considerable service of puncturing the unexamined clichés and self-serving cant that characterise the freedom of speech debate. He refuses to accept at face value the assumed contention between liberal secular notions of free speech and the supposed censorious strictures of Muslim intolerance, as played out in numerous recent controversies. Instead, he strips the discussion back to first principles, pointing out how all speech and writing is a dialogic act of communication that anticipates a response from its recipient. Offence is seen as the product of the relationship between speaker, addressee and all-important contextual power relations. In an era when 'liberals' from both the right and left have come together to denounce Islam as an intolerant force and a geopolitical enemy, Mondal reveals how professions of liberal reasonableness and neutrality mask an absolutist cultural supremacism wherein the 'right to offend' is separated from its consequences. He demonstrates how the central traditions of Western liberalism are each blind to the power relations which mark all societies and which take a particularly intractable form in multicultural ones.

At the heart of the book is the question, what is free speech for? Is it an end in itself? Or does it serve a higher purpose, such as safeguarding democracy, as is often claimed? In a brilliant, forensic analysis of some of the rhetoric around freedom and offence, Mondal asks how notions of a good and fair society can possibly be furthered by the deliberate denigration of a portion of its membership. Recognising ethics as central to the proper exercise of rights, he calls for an 'ethics of propriety' in writing and reading where mutual obligations are acknowledged. Through detailed readings of controversies such as the Satanic Verses affair, the Danish cartoon controversy, the outrage caused by the novel, The Jewel of Medina, and comedy films which have flirted with the sacred and the blasphemous, Mondal charts the dead-ends reached by conventional interpretations, while suggesting more fruitful ways to write, read and understand. This book is an important clarion call for care and sensitivity in our fraught multicultural world, while still emphasising a critical robustness that makes demands of all those who engage in public utterance." Peter Morey, Professor of English and Postcolonial Studies, University of East London, UK

Mentioned in the Times Higher Education, 13th January 2015: "[N]ovelist and journalist [Will Self] was speaking at the launch of Islam and Controversy, a new book by fellow Brunel scholar Anshuman Mondal. Coming less than a week after the massacre of journalists and cartoonists at the Charlie Hebdo magazine in France, the book launch was dominated by questions about press freedom in relation to Islam."

Mentioned in the Times Higher Education, 5th February 2015: "Drawing on case studies ranging from cartoon images of Muhammad published in a Danish magazine to reactions to Salman Rushdie's novel The Satanic Verses, Mondal argues forcibly in Islam and Controversy that the right to freedom of speech comes with responsibilities. 'The hard question is not whether you have the right to do that of course you do but is that the right thing to do?' he argues."