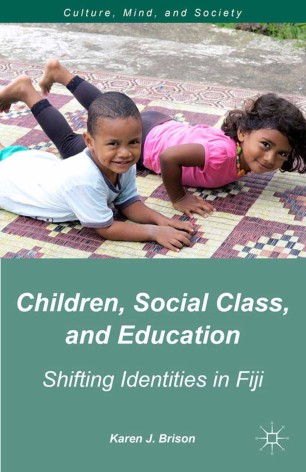 Class-based self-perception is a rising issue worldwide. Through observation in kindergartens in Fiji, Brison examines how schools instil these ideas in Suva children. Teachers have different goals depending on the social background of the families while students create friendships through shared experience of toys, gender roles, and mass media.

Karen Brison is Professor of Anthropology at Union College, USA.

"Subtle, textured, and highly readable, Children, Social Class, and Education provides a thought-provoking ethnographic exploration of kindergartens in Fiji. Brison's comparative account makes it clear that social class - and the assumptions and aspirations with which it is entangled - plays a key role in shaping how different preschools engage with children. Kindergartens are central and consequential sites for children's identity formation and they work, as Brison demonstrates, in complex and surprising ways." - Don Brenneis, Professor of Anthropology, University of California, Santa Cruz, USA

"In this sophisticated ethnographic study of pre-school children, teachers, and parents interacting in various kindergartens in multi-cultural and multi-ethnic Fiji, Karen Brison explores the complexities of ethnic identity as it is becoming superposed by increasingly important class inequalities. Through their seemingly innocuous play, children emerge in this important book as both the subjects and objects of intersecting forms of social difference." - Niko Besnier, author of On the Edge of the Global: Modern Anxieties in a Pacific Island Nation

"In this ethnographically rich and analytically engaging book, Brison takes us to the multicultural Pacific Island nation of Fiji where recently introduced preschools are shifting views of kin and countrymen. Working with teachers and students in seven kindergartens and focusing on children's play, she compellingly demonstrates how early education is differentiating - both affectively and structurally - wealthier children as members of a neoliberal 'class culture' from poorer children as members of (simplified) ethnic cultures." - Deborah Gewertz, Professor of Anthropology, Amherst College, USA