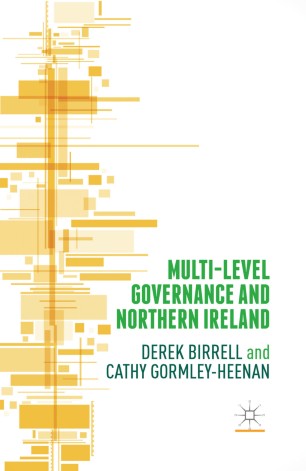 This book examines the governance arrangements in Northern Ireland through a multi-level lens, particularly in the period since the new institutions established through the 1998 Agreement became more firmly embedded.

Cathy Gormley-Heenan is the Director of the Institute for Research in Social Sciences (IRISS) and a Professor of Politics in the School of Criminology, Politics & Social Policy at the Ulster University. Her primary research interests lie in the areas of political elites, peace processes, public policy and the politics of divided societies.

Derek Birrell is Professor of Social Policy in the School of Criminology, Politics & Social Policy at the Ulster University. He was formerly the Head of the School of Social and Community Sciences and subsequently the School of Policy Studies. He is the author of the recent books Comparing Devolved Government (2012), The Impact of Devolution on Social Policy (2009) and Direct Rule and the Governance of Northern Ireland (2009).

'This book is a crucial addition to the study of politics in Northern Ireland. The UK's political science literature is well served on the topic of conflict in Northern Ireland, but not its domestic policy and policymaking. As Birrell and Gormley-Heenan show, this is not because its policymaking is easy to understand! In fact, it is a key example of complex government involving multiple levels of government, which overlap with each other in often unpredictable ways, and many types of policymaking organisations which produce what we call, for the sake of simplicity, 'policy'. Only a book length treatment does justice to the complicated and sometimes idiosyncratic nature of policymaking in Northern Ireland'. Paul Cairney, Professor of Politics and Public Policy, University of Stirling, UK

'This is a detailed and deeply well-informed guide to the way in which UK, EU, supranational, all-Ireland and local as well as devolved levels of government all play their part in the contemporary governance of Northern Ireland. The governance of Northern Ireland can all too easily be read narrowly through localist political lenses, focusing on the internal world of devolved power-sharing; this is a valuable book for applying ideas from political science to broaden the perspective and hence encourage readers to think through the complexity of multi-level governance even in a society apparently still working out the problems of the past. A key source for students, researchers and practitioners seeking to understand post-devolution Northern Ireland.' Jonathan Bradbury, Chair in Politics, Swansea University, UK