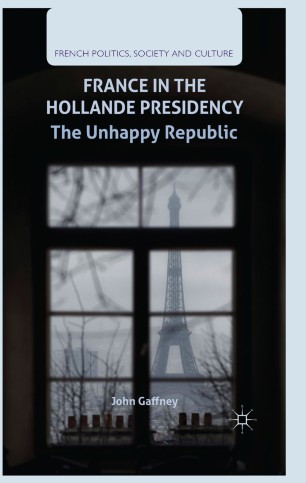 France in the Hollande Presidency

An analysis of the first half of François Hollande's five-year presidential term that examines the strengths and weaknesses of presidential politics following the Left's return to power in 2012 and puts forward an interpretation of the underlying nature of contemporary French politics, and the French Fifth Republic.

'Through a detailed analysis of the public performance of Hollande's first two and a half years as French President, Gaffney seizes the opportunity to explore the very peculiarly personalised dimension of the Fifth Republic presidency. He uses his depth of knowledge of France's political culture and history to offer the reader a highly original and stimulating reflection on the symbolic dimension of contemporary political leadership.' Florence Faucher, Professor of Political Science, Sciences Po, Centre d'études européennes, France

'Few observers understand the wellsprings of modern French political leadership as well as John Gaffney. When he brings his formidable analytical skills, honed over more than 30 years of study, to bear on the hapless François Hollande, the result is illuminating, devastating, and quite unlike anything else you will read on French politics today.' Andrew Knapp, Professor of French Politics and Contemporary History, University of Reading, UK

'The presidency of the Fifth Republic is one of the more distinctive of European political institutions and one of the least understood. Professor Gaffney is as good a guide as Virgil through the circles of this subject as well as providing a guide to the ramifications of French Presidentialism. This book is insightful and readable and both a thoughtful and valuable discussion but also something much rarer, a theoretical understanding of leadership.' David S. Bell, Emeritus Professor of French Government and Politics, University of Leeds, UK