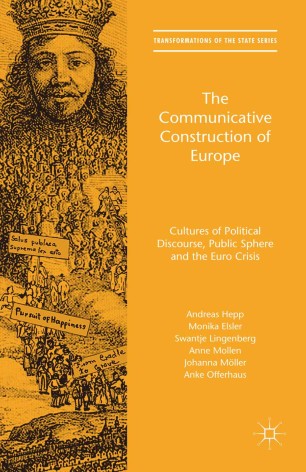 Cultures of Political Discourse, Public Sphere and the Euro Crisis

Based on a 12-year long project, this book demonstrates the contested character of the communicative construction of Europe. It does so by combining an investigation of journalistic practices with content analysis of print media, an examination of citizens' online interactions and audience studies with European citizens.

"With admirable conceptual clarity and truly impressive empirical richness, Andreas Hepp and his colleagues offer a compelling portrait of a transnational Europe and of the EU as an ongoing and contested communicative construction. Written in an engaging and accessible style, the volume inserts itself in the heart of contemporary debates about the EU and its crisis. With its analytic precision, it is essential not only for students and researchers involved with questions about a European public sphere, but also for policy- and decision makers, journalists, and concerned citizens. This book represents the new benchmark for studies in this area." - Peter Dahlgren, Lund University, Sweden

"A prolific milieu founded by the late Bernhard Peters at the University of Bremen has long been a leading centre for the development of public sphere research, theoretically and empirically. In The Communicative Construction of Europe, Andreas Hepp and his colleagues deliver another solid contribution to this tradition. Combining a variety of methodologies the research presented in this book both reconceptualises the notion of a European public sphere and provides ample empirical evidence that such a phenomenon actually exists and becomes increasingly important. A landmark contribution to the field, it is also an invitation to further scholarly and political discussions." - Jostein Gripsrud, University of Bergen, Norway

"This book presents a powerful argument against the doomsday narrative about the EU in the aftermath of the Euro crisis. Based on an impressive array of empirical data from 1982-2013, The Communicative Construction of Europe demonstrates that the Euro crisis has accelerated rather than reversed the ongoing Europeanization of public spheres despite continuing national segmentation. Required reading for anybody interested in contemporary European affairs!" - Thomas Risse, Freie Universität Berlin, Germany