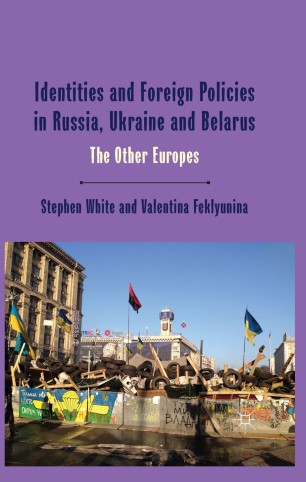 Identities and Foreign Policies in Russia, Ukraine and Belarus

This book maps changing definitions of statehood in Russia, Ukraine and Belarus as a result of their exclusion from an expanding Europe. The authors examine the perceptions of the place of each state in the international political system and its foreign policy choices, and draw comparisons across the region.

Stephen White is James Bryce Professor of Politics at the University of Glasgow, UK, and Visiting Professor at the Institute of Applied Politics in Moscow. His recent books include Understanding Russian Politics (2011), Russia's Authoritarian Elections (co-authored, 2012) and Waiting for Reform under Putin and Medvedev (co-edited with Lena Jonson, 2012).

Valentina Feklyunina is a Lecturer in Politics at Newcastle University, UK. Her research focuses on the questions of identity and foreign policy in the former Soviet Union. Her recent publications include The International Economic Crisis and the Post-Soviet States (co-edited with Stephen White, 2013) and Managing Russia's Image in the West (forthcoming).

“The study examines the construction of identities taking benefit from discourse analysis, and using sources ranging from newspaper articles to official documents. In addition, the authors make extensive use of surveys and findings from focus group interviews. … This book is a very significant contribution to the literature on politics in the post-Soviet region as well as the identity politics in the region.” (Insight Turkey, insightturkey.com, Vol. 19 (2), 2017)

“This work does a splendid job in mapping and analyzing identity constructions and their evolution in Russia, Ukraine and Belarus after the dissolution of the Soviet Union, as well as showing their political implications.” (Tuomas Forsberg, Slavic Review, Vol. 75 (2), Summer, 2016)

“This book positions itself deftly within growing bodies of literature on identity and foreign policy, with much of its value stemming from its multi-disciplinary approach. This book offers an impressive analysis on a topic pertinent to the directions of the EU and Russia, Belarus and the Ukraine, which, while geographically proximate, are yet so distant.” (Scott Nicholas Romaniuk, Journal of Common Market Studies, Vol. 54 (3), 2016)

“The book is an important contribution to the study of foreign policy making and the function of the dominant interpretations of identity in it. Furthermore, it provides a new breadth for understanding official foreign policy discourses in Russia, Ukraine, and Belarus towards the EU and Europe. This book is useful on many counts, and not only for those concerned with the post-Soviet space, but also for anyone invested in the future of the EU in general.” (Alina Jasina, Kult Online, Vol. 46, 2016)

"...an outstanding piece of interdisciplinary research on relations between Europe and its neighbours with detailed insight and analysis, explaining dense empirical material in an engaging and accessible way and giving a number of interesting details." - Europe-Asia Studies