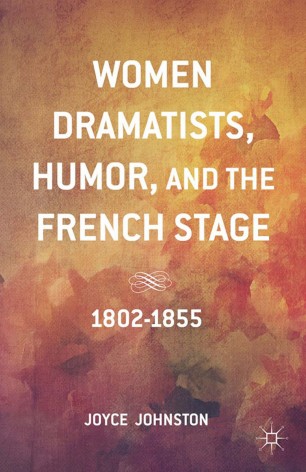 Filling a critical void, this book examines French women dramatists of the nineteenth-century who staged works prior to the lifting of censorship laws in 1864. Though none staged overtly feminist drama, Sophie de Bawr, Sophie Gay, Virginie Ancelot, and Delphine Girardin questioned patriarchal dominance and reconstructed ideals of womanhood.

“Women Dramatists, Humor and the French Stage clearly and concisely presents authors whose work has been forgotten to our detriment. Joyce Johnston’s readings of these plays are judicious, and her examples and analysis are enlightening. … The important questions that this book raises about genre, gender, and theatrical authorship will also interest scholars working on women’s writing more generally.” (Cary Hollinshead-Strick, Nineteenth-Century French Studies, Vol. 44, Winter, 2015-2016)

"Women Dramatists, Humor, and the French Stage is a much-needed and well documented study of comedy by early nineteenth-century women playwrights. In addition to information about the authors' lives, and the performances and reception of their plays, Johnston's insightful analysis focuses on their subversive use of humor in comedies that give us a glimpse into the lives of French women during the first half of the century while critiquing social and gender norms behind a façade of laughter." - Cecilia Beach, Director, Women's and Gender Studies, Hagar Chair, Alfred University, USA

"Johnston's captivating study brings to light some highly entertaining theatrical works by nineteenth-century French female playwrights that, although successful in their day, have been neglected until very recently. Her book convincingly demonstrates how female dramatists contributed to a new feminine tradition of humor while simultaneously exposing societal practices that oppressed women. Readers who are interested in the history of French theatre, women's studies, or cultural studies will find the book's rich plot analysis insightful and utterly delightful." - Theresa Varney Kennedy, Baylor University, USA

"Johnston sheds light on two related areas where the contribution of French women has been marginalized or forgotten: writing and staging plays during the first half of the nineteenth century, and devising a distinctively female brand of humor. The four playwrights, studied for the first time in English, garnered recognition in their own time with plays, mostly short comedies, of genuine artistic merit. Those plays are relevant today because of their subtle advocacy for women's rights at a time when laws and customs aimed to keep them subservient." - Perry Gethner, Regents Professor, Norris Professor, French, Oklahoma State University, USA