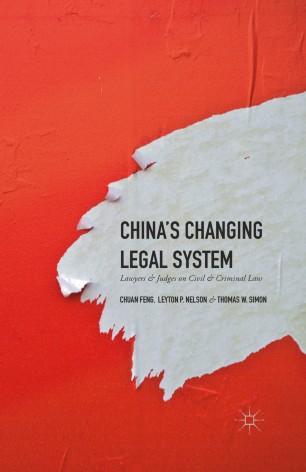 While much international attention has been focused on China's developing economy, dramatic changes are also taking place in its legal system. This book is a groundbreaking, comprehensive introduction to China's legal system, covering the major areas of both civil and criminal law. The authors present fascinating cases and balanced accounts of controversial issues, from copyright law to punishment. By letting Chinese lawyers and judges speak for themselves, the authors also allow readers a surprisingly candid insider's view of real life legal practice.

Chuan Feng is Lecturer at the Hopkins-Nanjing Center for Chinese and American Studies and Assistant Professor at Nanjing University School of Law, China. He has an active law practice in Nanjing and is the author of A Moral Philosophy Study on Hegel's Philosophy of Rights.

Leyton P. Nelson is a graduate student at the Hopkins-Nanjing Center for Chinese and American Studies, China. He holds a JD from the University of Michigan Law School.

Thomas W. Simon is Professor of International Law at Johns Hopkins University's School for Advanced International Studies (SAIS) at the Hopkins-Nanjing Center, China. Some of his books include: The Laws of Genocide; Ethnic Identity and Minority Protection; and Genocide, Torture, and Terrorism.

"A different perspective on the development of Chinese law; a perspective that worth paying attention to." – Jianfu Chen, Professor of Law, La Trobe University Law School, Australia

"The authors of this book are impressively ambitious in their project to explore legal practice in contemporary China by taking an empirical perspective and employing a law-and-society approach. An abundance of figures relating to legal practice in China and interviews with Chinese lawyers and judges will prove to be quite valuable for readers wishing to understand many aspects of China's legal system – a system widely known to be somewhat opaque and elusive." - Xing Lijuan, City University of Hong Kong, author of Behind the Multilateral Trading System: Legal Indigenization and the WTO in Comparative Perspective (2012) and co-author of Legal Transparency in Dynastic China: The Legalist-Confucianist Debate and Good Governance in Chinese Tradition (2013).

"This is a fine work; it delivers well on its promise to give readers 'an insightful glimpse into many aspects of China's legal system' – and it does so by taking readers into 'the belly of the beast' (that is, the Chinese legal system as it operates today) by drawing from interviews with a great many practitioners and others closely involved in the practice of law in China. I applaud this effort." - John W. Head, University of Kansas, author of Great Legal Traditions: Civil Law, Common Law, and Chinese Law in Historical and Operational Perspective (2011) and China's Legal Soul: The Chinese Legal Identity in Historical Context (2009), and co-author of Law Codes in Dynastic China (2005).

"This volume provides a contemporary and wide-ranging analytic description of the legal system of the PRC, in its domestic and international contexts. In addition to drawing on official and scholarly sources, the authors have interviewed legal actors on the ground, seeking to capture an everyday understanding of Chinese law—one of the most poorly understood and most rapidly changing phenomena in the PRC today." – Teemu Ruskola, Professor of Law, Emory University School of Law, USA

"China's Changing Legal System draws on a wide range of interviews to provide a much-needed window into the actual operation of China's legal system. The authors weave an array of crucial practical issues—such as the daily pressures on the work of police, prosecutors, and judges—into their solid overview of China's written laws. For those new to the study of Chinese law, China's Changing Legal System is an engaging introduction to the many facets of China's legal system. For those who have a background in Chinese law, the book offers a fresh, textured analysis of legal issues by combining extensive interviews of people who operate in China's legal system with more traditional scholarly research." - Margaret K. Lewis, Professor of Law, Seton Hall University, USA
Buy options