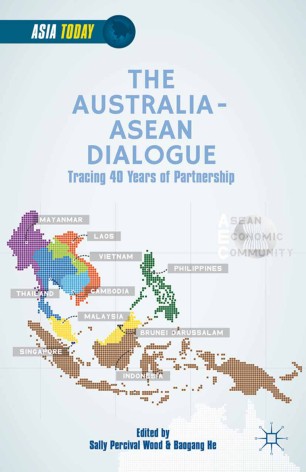 This book examines the Australia-ASEAN Dialogue Partnership since its inception in 1974 and looks at the networks of engagement that have shaped relations across three areas: regionalism, non-traditional security, and economic engagement.

'While ASEAN has held a range of dialogues with major and middle powers over the years, its partnership with Australia has gone from strength to strength, and has become an enduring and maturing axis that transcends geography for Australia and offers middle-power leveraging for ASEAN, while harmonizing and promoting mutual interests on both sides. This edited book weaves a persuasive tapestry of mutual discovery between Australia and ASEAN from their modest and uncertain origins four decades ago to current challenges and opportunities going forward. Its authors have provided instructive lenses to see how the Australia-ASEAN relationship has become so compelling and mutually indispensable.' - Thithinan Pongsudhirak, Director of the Institute of Security and International Studies, Chulalongkorn University, Bangkok, Thailand

"Australia's long-standing relationship with ASEAN as a formal grouping is all too often overlooked in the secondary literature. Yet, the breadth and depth of cooperation has been striking and sustained, including in areas as diverse as counter-terrorism, higher education, finance, nuclear energy, and food security. The collection of essays in this book provides an excellent overview of how the relationship has changed since Australia became ASEAN's first dialogue partner in 1974. The editors are to be commended for organizing such a splendid book, which I'm sure will quickly become one of the outstanding references for Australia's relationship with Southeast Asia.' - Andrew O'Neil, Professor of Political Science and Head of the School of Government and International Relations, Griffith University, Australia

'Australia's relations with the Southeast Asian region have undergone a fundamental transformation in the last half century in tandem with the emergence of the region from being a cockpit of instability and turmoil to one of peace, stability, and dynamic economic growth. Instead of viewing the region through the narrow prism of security and defence, Australia is now engaged intensely on a broad number of fronts. Geoeconomics rather than security is now the driving force. The formation of ASEAN in 1967 and its rapid emergence as the fulcrum of wider regional processes in the Asia Pacific region have further emphasized the importance of ASEAN and the region to Australia. Today both ASEAN and Australia play important roles in both prospering each other as well contributing constructively to the peace, stability, and prosperity of the Asia Pacific region. This book, which evaluates the relations against the backdrop of the four decades old Australia-ASEAN Dialogue, benefits from insights and perspectives of both sides. It does not pretend to be either exhaustive or comprehensive. But it does manage to capture, rather well, some of the dominant strands in the relations as well as some of the difficult issues that both sides grapple with given their sometimes divergent interests, strategic considerations, and cultural and political contexts. Above all, I see this book as a solid commitment to investing even more towards expanding and deepening mutually beneficial relations between Australia and ASEAN in the years ahead.' - Tan Sri Mohamed Jawhar Hassan, Chairman, ISIS Malaysia