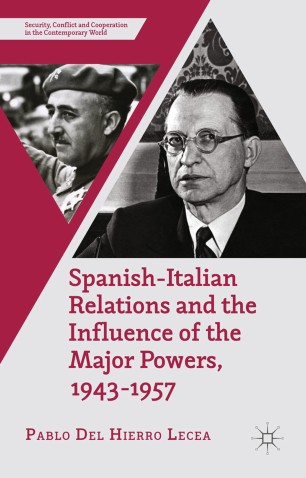 Spanish-Italian Relations and the Influence of the Major Powers, 1943–1957

Spanish-Italian Relations and the Influence of the Major Powers examines complex relations between Spain and Italy, beginning in 1943 and continuing until 1957, contending that the relationship cannot be examined in isolation and must be understood in its broader context.

Pablo Del Hierro Lecea is a Lecturer in Global History at the Faculty of Arts and Social Sciences, Maastricht University, the Netherlands. He specializes in international relations and political history in the twentieth century, focusing on right wing movements and neo-fascism.

'An impressive account of Spanish-Italian relations post-1943. Thoroughly researched, Pablo Del Hierro Lecea manages to juggle a remarkable number of archives in five different countries to build this fascinating story. The clever inclusion of the major powers in the narrative makes the book an even more relevant contribution for the historiography of Spain and Italy, and also of the Cold War.' - Fernando García Sanz, EEHR, Spanish School of History and Archaeology in Rome, Italy

'Subtlety of argument, deep research, and a lively writing style mark Pablo del Hierro Lecea's superb study of Spanish-Italian relations during the underanalyzed period 1943-1957. It treats both bilateral and international diplomacy with intelligence and care. There is nothing else like it in the literature of Europe's Cold War.' - Andrew J. Rotter, Colgate University, USA