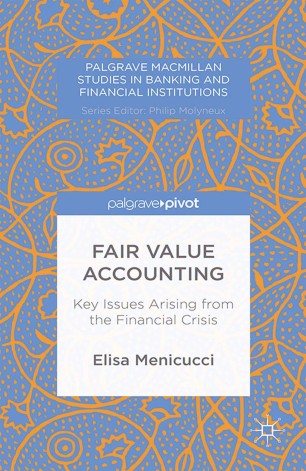 The 2008 financial crisis has turned a spotlight on the role of financial reporting in periods of economic downturn. In analysing the financial crisis, many commentators have attributed blame to fair value accounting (FVA) because of the pro-cyclical effect it potentially introduces in banks' financial statements. This book discusses how FVA affects financial reporting during a financial crisis. It provides an in-depth analysis of the key benefits and negatives of FVA, and discusses the controversial practice of trade-offs with historical cost accounting (HCA). It provides an overview of the principles and applications of FVA, and explains its impact on banks' financial statements. Investigating the effect of FVA on the volatility of earnings and regulatory capital in European banks, the book asks whether incremental volatility is indeed reflected in bank share prices. It examines empirical evidence to quantify the role that FVA may have played in times of stress in the banking sector, both in Europe and elsewhere. Fair Value Accounting explores the criticism FVA has received despite its perceived merits, and summarizes the various opposing views of parties in this major policy debate, which has involved banking and accounting regulators from across the globe.