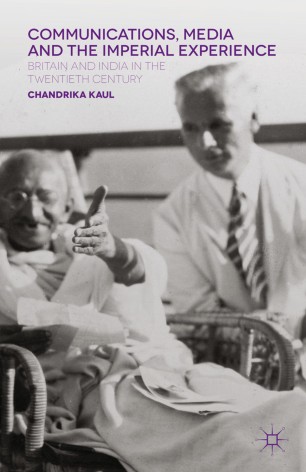 Communications, Media and the Imperial Experience

Britain and India in the Twentieth Century

Presenting a communicational perspective on the British empire in India during the 20th century, the book seeks to examine how, and explain why, British proconsuls, civil servants and even the monarch George V, as well as Indian nationalists, interacted with the media, primarily British and American, and with what consequences.

Chandrika Kaul is Lecturer in Modern History at the University of St Andrews, Scotland. Her research interests include the British media and empire, 1850-1950, modern Indian history and politics, globalization, and, communications in world history. She is the author of the first detailed monograph examining British press coverage of India entitled Reporting the Raj: The British Press and India (2003). She has also edited Media and the British Empire (2006, 2013) and Explorations in Modern Indian History and the Media (2009) and, co-edited International Communications and Global News Networks: Historical Perspectives (2011).

“This book provides important linkages between the political and historical processes of the empire and colonialism as well as a contemporary study of the impact of communication, news media and globalisation. It will be of value to those with interests in Modern Indian history and politics and communications in world history.” (Romero D’Souza, Media International Australia, Vol. 165 (1), 2017)

“All five of Professor Kaul’s essays are interesting and with this book she will have done much to shore up her reputation as one of Britain’s leading interpreters of the media. … Communications, Media and the Imperial Experience is likely to remain a standard work for many years to come.” (Joel H. Wiener, Journalism Studies, Vol. 16 (5), 2015)

“The major achievement of this book is in the way it integrates imperial and media history to generate an understanding of empire as a ‘media environment’. … provides a new and important perspective on M. K. Gandhi’s relations with the American press. … a meticulously researched, original and important contribution to the media history of the British Empire.” (Peter Putnis, Media History, Vol. 21 (4), October, 2015)