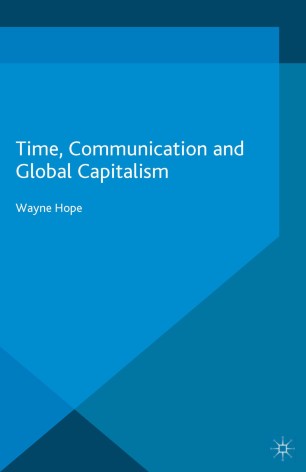 In this book Wayne Hope analyzes the double relation between time and global capitalism. In order to do this, he cross-relates four epistemes of time - epochality, time reckoning, temporality and coevalness – with four materializations of time – hegemony, conflict, crisis and rupture. Using this framework allows Hope to argue that global capitalism is epochally distinctive, riven by time conflicts, prone to recurring crises, and vulnerable to collective opposition. These critical insights are not easily thematized in a mediated world of real-time reflexivity, detemporalized presentism, and denials of coevalness associated with structural exclusions of the poor. However, the worldwide repercussions of the 2008 financial collapse and the resulting confluence of occupation movements, riots, protests, strike activity, and anti-austerity activism raises the prospect of a rupture within and beyond global capitalism.

Wayne Hope is Associate Professor at Auckland University of Technology, New Zealand. He is a researcher, teacher and media commentator across the areas of New Zealand media history, public sphere analysis, the political economy of communication, sport-media relationships, globalization and time. He is joint editor of the online IAMCR journal Political Economy of Communication.

"Wayne Hope has written the kind of book that is so lacking, yet so necessary today. He has analysed with great acuity and thoroughness the fundamentals of the all-important intersection between temporality, communication technologies and the supercharged logic of capitalism that has turned our world upside down. Most importantly, Hope not only dissects the baleful effects of a global capitalism very nearly out of control, but shows—by making the logic of temporality salient—what may be done to resist wave after wave of neoliberal assault upon human dignity and social solidarity." - Robert Hassan, University of Melbourne, Australia

"In this cogently argued and deeply researched book, Wayne Hope takes issue with the prevailing emphasis on space in critical conceptions of global capitalism, and insists on the centrality of time and its reorganisation in understanding contemporary dynamics and crisis. Ranging from financial dealing, to labour relations, to everyday life, he demonstrates how our current accelerated, instantaneous and ever present time regimes are intensifying economic instability, hollowing out deliberative democracy, redefining our sense of community, and becoming the epicentre of struggles between corporations, states, and movements of resistance. It is a virtuoso work of synthesis, provocative and path-breaking. It needs to be read by anyone interested in the ways we live now, where we might be headed, and how we might arrive at destinations not on the neo-liberal route map." - Graham Murdock, Loughborough University, UK

"Wayne Hope's Time, Communication and Global Capitalism is a work of deep scholarship and profound political implication. Challenging the prevalent spatial turn in recent Marxist thought, he analyzes the restructuring of time effected by contemporary cybernetic capital. This temporal analysis proceeds by a series of vigorous conceptual encounters with the giants of contemporary theory, from David Harvey to Antonio Negri. Even more importantly, however, by showing how capital shapes its own time, Hope also unfolds the counter-temporalities, the 'different times,' that must be produced to enable any passage to a new mode of production—and in this respect his book is a vital one not just for scholars, but also for militants." - Nick Dyer Witheford, University of Western Ontario, Canada
Buy options