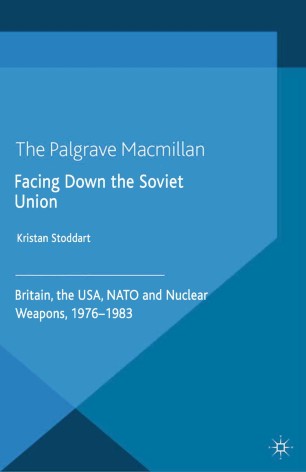 Facing Down the Soviet Union

Facing Down the Soviet Union reveals for the first time the historic deliberations regarding the Chevaline upgrade to Britain's Polaris force, the decisions to procure the Trident C-4 and then D-5 system from the Americans in 1980 and 1982. It also details the decision to base Ground Launched Cruise Missiles in the UK in 1983.

Kristan Stoddart is a Lecturer in Cyber Security at the Department of International Politics at Aberystwyth University, UK. He is the author of four books and has spoken nationally and internationally on the subject of nuclear weapons and other security issues. He is also Deputy Director of the Centre for Intelligence and International Security Studies.

“Provide a full account of the debates within the British government about an earlier modernization that resulted in the deployment of US ground-launched cruise missiles to the United Kingdom and elsewhere in Western Europe in the 1980s. … provide new insights into our understanding of the UK’s nuclear history and should be read by those interested in this subject area, in the US–UK relationship, and British defence policy more generally and by those analysing why states retain nuclear capabilities.” (Andrew Dorman, International Affairs, Vol. 91 (6), 2015)

'The third volume in Kristan Stoddart's monumental history of British nuclear deterrent policy takes the reader from 1976 to 1983, a key period in the story when nuclear policy became an important domestic political issue. As usual, he handles his wide range of sources with consummate skill and insight.' - Professor Eric Grove, Liverpool Hope University, UK