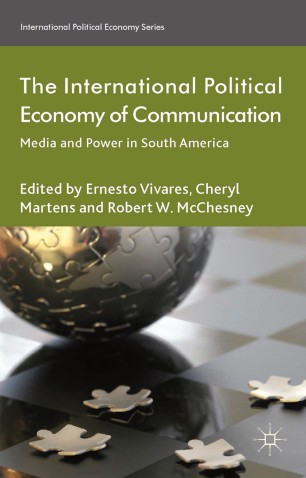 The International Political Economy of Communication

Media and Power in South America

This collection reflects on the international political economy of media and the valuable lessons to be learned from the media reforms currently taking place across South America. The contributors present a range of theoretical and methodological perspectives on the ongoing battle for media space in South America, and the volume includes a foreword by Ernesto Laclau.

Cheryl Martens is Head of Research at the Universidad de las Américas, Quito, Ecuador and Senior Lecturer in the Media School at Bournemouth University, UK. She holds a PhD in Sociology from the University of Manchester, UK, and has lectured at universities in Argentina, Ecuador, Slovakia, Japan and the United Kingdom. Her research and publications concentrate on the sociology and political economy of communication and media policy. She is co-editor of Strategies for Media Reform: International Perspectives (forthcoming 2015).
Ernesto Vivares is Research Professor in the International Relations and Communications Department at the Facultad Latinoamericana de Ciencias Sociales (FLACSO), Ecuador. His work focuses on the political economy of South American regionalism and development. His recent publications include Financing Regional Growth and the Inter-American Development Bank (2013) and Exploring the New South American Regionalism (2014).
Robert W. McChesney is the Gutgsell Endowed Professor in the Department of
Communication at the University of Illinois, USA. He is the co-founder of Free Press, a national media reform organization. His work concentrates on the history and political economy of communication, emphasizing the role media play in democratic and capitalist societies. McChesney has written or edited 27 books, which have been translated into 31 languages, and he is the editor, with John Nerone, of The History of Communication series.