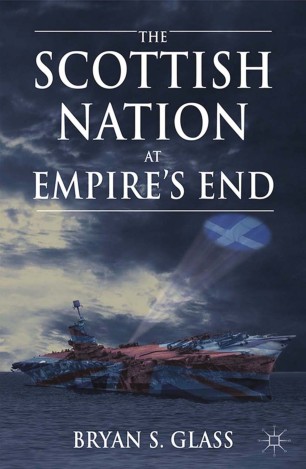 The Scottish Nation at Empire’s End

The rise and fall of the British Empire profoundly shaped the history of modern Scotland and the identity of its people. From the Act of Union in 1707 to the dramatic fall of the British Empire following the Second World War, Scotland's involvement in commerce, missionary activity, cultural dissemination, emigration, and political action could not be dissociated from British overseas endeavors. In fact, Scottish national pride and identity were closely associated with the benefits bestowed on this small nation through its access to the British Empire. By examining the opinions of Scots towards the empire from numerous professional and personal backgrounds, Scotland emerges as a nation inextricably linked to the British Empire. Whether Scots categorized themselves as proponents, opponents, or victims of empire, one conclusion is clear: they maintained an abiding interest in the empire even as it rapidly disintegrated during the twenty-year period following the Second World War. In turn, the end of the British Empire coincided with the rise of Scottish nationalism and calls for Scotland to extricate itself from the Union. Decolonization had a major impact on Scottish political consciousness in the years that followed 1965, and the implications for the sustainability of the British state are still unfolding today.

Bryan S. Glass teaches the history of Britain's interactions with the World at Texas State University, USA. He is the Founder of The British Scholar Society and serves as the lead editor of the Britain and the World book series (Palgrave Macmillan). His publications include an article in the Journal of Imperial and Commonwealth History and an anthology co-edited with John M. MacKenzie entitled Scotland, empire and decolonisation in the twentieth century (2015).

"There are now a number of theories relating to the relationship between Britain and its empire. Some suggest that the British took a keen interest in their colonies, not just as places of settlement but also in terms of their importance to the economy and status of the UK. Others take the line that the British were largely indifferent both to their role as an imperial people and to the territories marked in red upon the map. Recently, there has been a suggestion that the empire served to emphasise the identity of the 'four nations' of the British and Hibernian Isles – English, Scottish, Irish and Welsh. This excellent book makes a major contribution to all these debates. Its author suggests that events in the empire were closely followed in Britain, not least in Scotland, right up until the late 1950s. Using a striking range of sources and archives, including oral evidence, Glass ranges widely over the reactions of Scottish business, the unions, the church, the newspapers that were in many homes, and the schools. The result is a book which should take its place as a truly significant work about the important domestic dimensions of imperial history. It should be read by all scholars, students and members of the general public interested in this key field for understanding modern British history." - John M. MacKenzie, Emeritus Professor of Imperial History, Lancaster University, Honorary Professor, University of St. Andrews, UK

"The Scottish Nation at Empire's End addresses itself perceptively to problems of the Scottish nation, national ideology, and nationalism in the different eras of Scottish history. It demonstrates conclusively that the Scots maintained an intricate and major place in the Empire even when it began to collapse around them, with many believing that it ended too soon. In this major work Bryan Glass has written a penetrating and illuminating study of the Scots and the end of the British Empire." - Wm. Roger Louis
Kerr Professor, University of Texas
Buy options