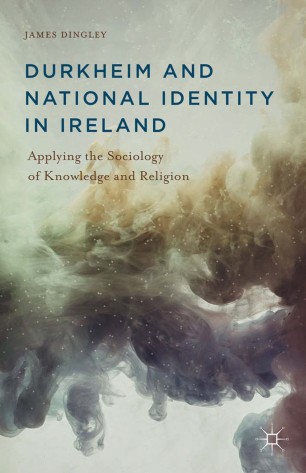 Durkheim and National Identity in Ireland

Applying the Sociology of Knowledge and Religion

This book examines the development of opposed Nationalist and Unionists identities as products of different economies, symbolically represented in religious differences, that impelled conflicting cultures and ideals of best interest that were fundamentally incompatible within a single identity.

James Dingley is a sociologist who has researched terrorism and nationalism at the University of Ulster, UK, and Queen's University Belfast, Ireland. He is former Head of Department of Business and Management, University of Kurdistan-Hawler, Iraq, and Chairman of the Francis Hutcheson Institute, Belfast, Ireland. He has published widely in major international journals and this is his fifth book in the area of terrorism and nationalism.

"Durkheim and National Identity in Ireland provides an engaging analysis of the nation-building process in Ireland. Using Durkheim's theory, this book offers an alternative explanation for the transformation of religious, national, and cultural conflicts into moral ones. Its theoretical arguments and its re-examination of Irish history should capture the interest of scholars in nationalism, sociology of religion, and sociology of knowledge. Its sharp theoretical engagement should generate a nice debate among its Durkheimian as well as its non-Durkheimian readership." - Xabier Itçaina, Researcher, Center Emile Durkheim, Sciences po Bordeaux, France

"Analyses of conflict zones too often start from the conflict itself, this book instead explores how structures engender violence. Nor does Dingley just look at social, economic and political clashes. Using Durkheim's insights, he examines how competing value systems created the ground for conflict in Ireland, structuring difference in people's minds. As he points out, there is a fundamental need to address these underlying value systems if there is to be lasting reconciliation." - Peter Catterall, Reader in History, University of Wesminster, UK