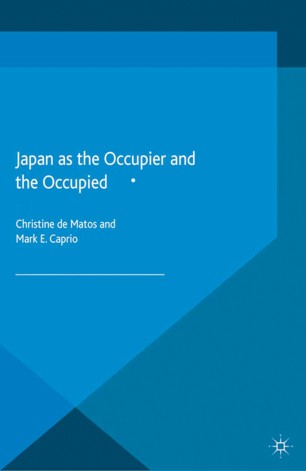 Japan as the Occupier and the Occupied examines transwar political, military and social transitions in Japan and various territories that it controlled, including Korea, Borneo, Singapore, Manchuria and China, before and after August 1945. This approach allows a more nuanced understanding of Japan's role as occupier and occupied to emerge.

Christine de Matos is Lecturer in History at the University of Notre Dame, Australia. She is the author of Imposing Peace and Prosperity: Australia, social justice and labour reform in occupied Japan (2008) and has co-edited, with Robin Gerster, Occupying the 'Other' (2009) and, with Rowena Ward, Gender, Power, and Military Occupations (2012).

Mark E. Caprio is Professor of Korean History in the College of Intercultural Communication at Rikky? University, Japan. He is the author of Japanese Assimilation Policies in Colonial Korea, 1910-1945 (2009). He is currently working on a manuscript tentatively titled 'The Dregs of Colonial Japan in Liberated Southern Korea, 1942-1948'.