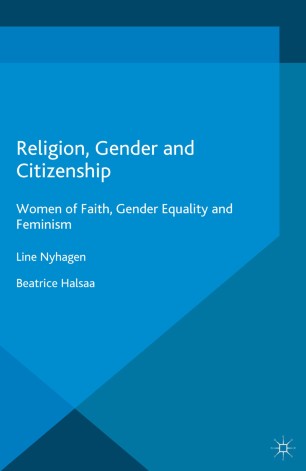 Through interviews with Christian and Muslim women in Norway, Spain and the United Kingdom, this book explores intersections between religion, citizenship, gender and feminism. How do religious women think about citizenship, and how do they practice citizenship in everyday life? How important is faith in their lives, and how is religion bound up with other identities such as gender and nationality? What are their views on 'gender equality', women's movements and feminism? The answers offered by this book are complex. Religion can be viewed as both a resource and a barrier to women's participation. The interviewed women talk about citizenship in terms of participation, belonging, love, care, tolerance and respect. Some seek gender equality within their religious communities, while others accept different roles and spaces for women. 'Natural' differences between women and men and their equal value are emphasized more than equal rights. Women's movements are viewed as having made positive contributions to women's status, but interviewees are also critical of claims related to abortion and divorce, and of feminism's allegedly selfish, unwomanly, anti-men and power-seeking stance. In the interviews, Christian privilege is largely invisible and silenced, while Muslim disadvantage is both visible and articulated. Line Nyhagen and Beatrice Halsaa unpack and make sense of these findings, discussing potential implications for the relationship between religion, gender and feminism.

Line Nyhagen is Reader in Sociology at Loughborough University, UK. A sociologist and political scientist, she researches gender within historical and contemporary religious contexts focusing on Christianity and Islam, as well as feminism and ethnic relations within the contexts of social movements and public policy.

Beatrice Halsaa is Professor in Gender Studies at the Centre for Gender Research at the University of Oslo, Norway. A political scientist, she researches the institutionalization of gender equality politics in Norway, the history of women's and gender research, feminist utopias, as well as feminism and ethnic relations within the contexts of social movements and public policy.

“Religion, Gender and Citizenship is an important intervention in the topic of religious women and their everyday lives. It does not rely on religious texts or rituals to reach conclusions, but rather takes an honest look at religious woman from three European countries … . The book does an excellent job of demonstrating how women negotiate citizenship, belonging, faith and the issue of how to relate to both women of different faiths and secular women.” (Haje Keli, LSE Review of Books, blogs.lse.ac.uk, April, 2018)
“This book is based on a comparative study of Christian and Muslim women in Norway, Spain, and the United Kingdom. It is a result of research conducted within the research project ‘FEMCIT: Gendered Citizenship in Multicultural Europe: The Impact of Women’s Movements’. …Nyhagen and Halsaa have provided a fascinating and thorough analysis of how Muslim and Christian women in three European countries view citizenship, religion, and gender. …For anyone interested in these issues, this book is a must-read.” (Inger Furseth, NORA - Nordic Journal of Feminist and Gender Research, Vol. 25 (3), October, 2017)
“The authors adopt a kind of sociological detachment from the views of their participants, showing the variety and complexity of their views … . In conclusion, I can thoroughly recommend this absorbing book. It employs a wealth of subtly analysed empirical material to address a topic that has long been uncomfortable for feminists, and yet one which demands our attention in an age when religion is increasing rather than declining in political significance.” (Dave Elder-Vass, The Sociological Review, Vol. 65 (2), May, 2017)
“Religion, Gender and Citizenship investigates how in Norway, the United Kingdom and Spain, Christian and Muslim women live religion in their everyday lives and conceptualize citizenship, gender equality, women’s movements and feminism. … Several strengths characterize the rich, well-written and nuanced monograph under review. … this book by Nyhagen and Halsaa is a necessary and welcome piece of research on the relevant role religion plays in our gendered western societies and polities.” (Celia Valiente, International Feminist Journal of Politics, Vol. 19 (2), May, 2017)​
“Because of growing religious diversity in many countries in the world, religion has gained much attention in the research of various disciplines. … Their analysis contributes to a more nuanced understanding of women and religion in Europe. … political scientists, gender researchers, and sociologists, but also readers mainly interested in theology, religious studies, or diaconal studies can learn a lot by reading this book.” (Annette Leis-Peters, Diaconia, Vol. 8, 2017)
“The volume Religion, Gender and Citizenship by Line Nyhagen and Beatrice Halsaa is an inspiring illustration of cross-national and comparative research on religion and gender. … Applying an intersectional awareness, the authors demonstrate that not only religion and gender but also race/ethnicity are important aspects of the identities and experiences of religious women. … Religion, Gender and Citizenship is therefore crucial literature for scholars engaged in the sociological and anthropological study of religion and gender.” (Nella van den Brandt, Tijdschrift voor Genderstudies, Vol. 20 (4), 2017)
“Religious women are often ignored by feminist scholars or assumed to be 'oppressed', while feminism is often rejected by religious women as 'selfish' or against their religious values. This book issues a fascinating and incisive challenge to both views, based on interviews with Muslim and Christian women in Norway, Spain and the UK. The authors weave the stories of religious women and the extensive (but overlooked) scholarship on gender and religion into a compelling argument: that religious women's approaches to gender equality and to their own religions are diverse. Religion is one aspect of their 'multi-layered' identities and a resource in their individual and communal lives. Their support for 'gender equality' often relies upon an 'equal but different' approach rejected by secular feminists, but this does not mean they oppose feminist aims. The study presents an excellent opportunity for feminists to reflect on why faith and feminism are still operating in tension. Religious women may be marginalised within feminist or secular discourse, but they are active in the public sphere, expressing their 'lived religious citizenship' in ways that often challenge gender inequalities. This fine book calls for dialogue and alliances between religious and secular feminist scholars and activists based on shared values of love, respect and a commitment to intersectionality. This excellent book reveals the complexity of religious women's lives in Europe and challenges generalizations made about, as well as by, religious women.” (Kristin Aune, Coventry University, UK)

“This is a thoughtful and thought provoking empirical study of 'faithful' Christian and Muslim women in Norway, Spain and the UK and how they live their religion, gender and citizenship. Its findings are quietly persuasive in a field long dominated by polemics including the views that religion 'makes meaning', provides ways of being in the world (one foundational offering constant interpretations of the world and the other compartmentalized during times of need) and produces identities that are negotiated not only through religion, but nation, marriage, motherhood, family, education and employment. Finally, religious citizenship challenges us to move beyond the narrow rights based approaches.” (Mervat Hatem, Howard University, USA)

“I highly recommend this very interesting study, in which Line Nyhagen and Beatrice Halsaa examine whether and how religion is a resource and a barrier to women's citizenship through an exploration of how Christian and Muslim women in Europe live their faith in everyday life. This is not another study on Muslim women, but on Christian and Muslim living their faith, and how they relate to the same questions. This opens new perspectives, not least how the environment contributes in an essential way to how identity is shaped and expressed.” (Lena Larsen, University of Oslo, Norway)

“This is a fascinating comparative study of (Christian and Muslim) religious women in Norway, Spain and the United Kingdom. Placing women's voices at the centre of their exploration, the authors discuss whether and how religion is a resource and barrier to women's citizenship. The narrative of the book de-essentialises religious women by highlighting the complexities inherent in their multiple identities and how they live their faith in daily life. The book offers interesting and important insights into how religion, gender and citizenship are intertwined within the broader socio-economic and political issues of secular versus religious and minority versus majority populations.” (Shaheen Sardar Ali, Warwick Law School, UK)

“Line Nyhagen and Beatrice Halsaa have made a landmark contribution to a fast evolving and challenging domain of scholarship. Religion, Gender and Citizenship: Women of Faith, Gender Equality and Feminism provides an indispensable overview of major debates and developments in this vibrant cross-disciplinary field. Theoretically, the authors astutely bring together the most salient insights from sociological, political, religious, gender, and cultural studies literatures. Empirically, they draw on rich interview data to deftly weave the voices of women from different Christian and Muslim traditions in Norway, Spain and the UK into a fascinating and nuanced account of religious women's perspectives on the role of religion in their lives. In doing so, Nyhagen and Halsaa demonstrate the merits and the necessity of putting the voices of diverse religious women at the center of analysis of the meanings and the practical, context-specific implications of lived religion in women's day-to-day lives. This book raises many questions for feminist scholarship and practice; it reveals the perceived limitations and contradictions of narrow, rights-based approaches to accommodating religion in multicultural societies and the need for deeper engagement with an ethics of care, love, tolerance and respect as central categories of analysis. It is essential reading for anyone interested in understanding the relation between religion, citizenship and women's rights and equality in the 21st century.” (Niamh Reilly, NUI Galway, Ireland)