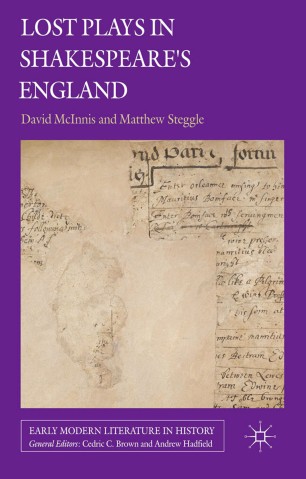 “The collection of thirteen essays … seeks to redress the way in which such plays are categorised, identified, and discussed in order to improve scholarly knowledge of playwrights’ and playing companies’ overall dramatic output. … this is a glorious volume that does justice to the burgeoning interest in so-called ‘lost’ plays … . This volume will serve to partner any focussed look at specific lost plays, as well as the broader catalogues and databases published in recent years.” (Natalie C. J. Aldred, SHARP News, sharpweb.org, August, 2016)

“The book represents the foundational act of a new, fertile field of inquiry as well as a veritable vade mecum for anybody wishing to work on lost plays. … Lost Plays in Shakespeare’s England marks a significant paradigm shift in early modern scholarship by defining a new field of inquiry that should be approached in high spirits … .” (Domenico Lovascio, Notes and Queries, December, 2015)

"There is a joy here in discovery of the new that pervades this lively and genuinely innovative volume. Its key value is in the theorizing of speculative methodology, but the individual contributions are an important reminder that an absence of a playbook need not mean a total absence of knowledge." Peter Kirwan, The Review of English Studies

"Lost Plays in Shakespeare's England testifies to the growing interest in this once neglected field of theatrical history While such forays may often seem individually to represent quite small and insignificant discoveries, the collective effort to identify the lost plays of early modern England is beginning significantly to reshape our view of the theatrical landscape in the age of Shakespeare, forcing a necessary revision of earlier assessments of popular taste, repertory behaviour, and dramatic composition." Ian Donaldson, Australian Book Review

"One of the pleasures of this season is Lost Plays in Shakespeare's England, edited by David McInnis and Matthew Steggle. The editors observe that there are about 543 extant commercial plays from the early modern English theater, about 744 known plays that are now lost, and perhaps another 1,800 unknown plays that do not survive even in name. How can we think about this invisible corpus? How did such plays develop themes (for example, Arthurian or Trojan matter) that remain visible in the surviving canon? How can we taxonomize them, extrapolate from known to unknown, and recognize what is lost even in those plays that survive? Perhaps most striking, what if the missing plays are more representative of the age than what remains? These are the kinds of questions entertained by McInnis and Steggle's contributors, and I cannot conceive of a scholar in the broader field who would not be engrossed by them." Roland Greene, SEL Studies in English Literature 1500-1900

"The first book on its topic, Lost Plays in Shakespeare's England is a major achievement: it defines a new field and gives it a shape, a nature and a range of critical approaches... All the essays provide new ways of approaching lost information and theorizing "lostness"... [The book] shows how thinking about what is lost forces us to rethink what is "found". It also strikes a salutary note. Many extant plays existed in other, variant, versions that are also lost, for "lostness is a continuum", as McInnis and Steggle show. By the end of the book, we have thrillingly recovered moments, instances, stories, characters and tendencies from lost plays, but at the expense of what we thought we had: existing plays, we realise, are a little bit lost, too." Tiffany Stern, Times Literary Supplement