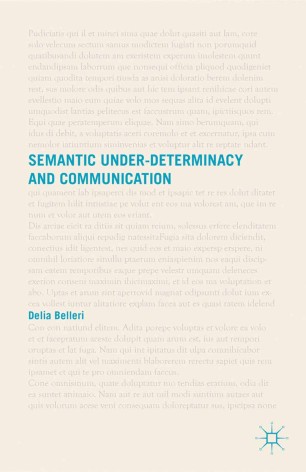 Combining a fresh, previously unexplored view of the subject with a detailed overview of the past and ongoing philosophical discussion on the matter, this book investigates the phenomenon of semantic under-determinacy by seeking an answer to the questions of how it can be explained, and how communication is possible despite it.

Delia Belleri is a Post-Doctoral Fellow at the Institute of Philosophical Investigations at the National Autonomous University of Mexico, Mexico City. Previously, she has been a research fellow at the COGITO Research Centre of Philosophy, University of Bologna, Italy. Her main research interests include semantics, pragmatics and their interface.