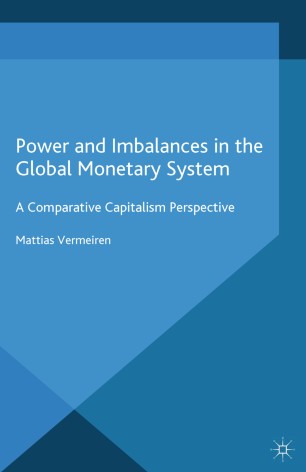 Power and Imbalances in the Global Monetary System

The author examines the indirect macroeconomic roots of the global financial crisis and Eurozone debt crisis: the escalation of global trade imbalances between the US and China and regional trade imbalances in the Eurozone. He provides new insights into the sources and dynamics of power and instability in the contemporary global monetary system

'Vermeiren's creative analysis calls attention to the domestic institutional sources of international economic imbalances involving US, China and the Eurozone. His book shows very effectively why international monetary specialists and scholars of comparative capitalism should talk to each other much more extensively.' Eric Helleiner, University of Waterloo, Canada

'Vermeiren's wide-ranging study impressively combines comparative and international political economy. It gives important insights into the issue of monetary power, not only for the United States, but also for the Eurozone and China. The conclusions are pessimistic for the global economy, and they are conclusions firmly grounded in an in-depth analysis. Scholars of IPE and CPE should take note." Iain Hardie, The University of Edinburgh, UK

'Mattias Vermeiren's Power and Imbalances in the Global Monetary System is a highly important contribution to our understanding of the structural causes of the recent economic crises. Particularly impressive is his combination of international political economy thinking on monetary power with comparative political economy concepts of national capitalist institutions. This combination of IPE and CPE should help us to overcome the unproductive split between international and comparative perspectives and will hopefully inspire future studies on many other issues of the global political economy.' Andreas Nölke, Goethe University Frankfurt, Germany