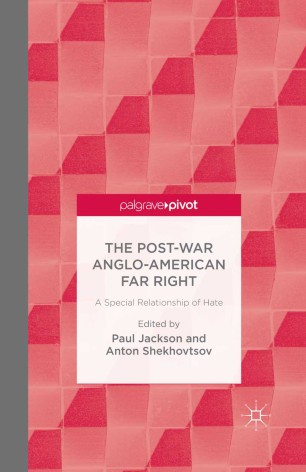 The Post-War Anglo-American Far Right: A Special Relationship of Hate

Since 1945 neo-Nazi and far right extremists on both sides of the Atlantic have developed rich cultures which regularly exchange ideas. Leading activists such as Colin Jordan and George Lincoln Rockwell have helped to establish what has become a complex web of marginalised extremism. This book examines the history of this milieu to the present day.

“The Post-War Anglo-American Far Right is recommended for scholars interested in transatlantic radicalism and transnational fascism. Published by Palgrave Pivot, which specializes in shorter studies, the book brings together new research about the transnational extremists. … this anthology has solid research and provokes good questions about avenues for further studies about foreign exchanges, not just about Anglo-American ties, but about other international links, such as those between British and French extremists.” (Ryan Shaffer, History, Vol. 103 (354), January, 2018)
Buy options